On Sunday I ran my first race (yes, ever), which happened to also be my first ultra distance run: the Trail Marathon/50K in Pinckney State Recreation Area. It sounds like a terrible idea, but having a big ugly goal like a spring Ultra hanging over me all winter was just the motivation I needed to keep moving during the cold months.

The course consisted of two 13.1 mile loops on the Potawatomi trail encircling the park, with a five-mile add on loop to bring the distance to 50K.

The elevation gain was 3100′ and that was definitely the most challenging aspect of the course. A couple of the hills seem particularly long compared to the rest, but most of the course is just rolling hills. The soil drains well so the ground was firm but there were quite a few roots and rocks to keep things interesting. 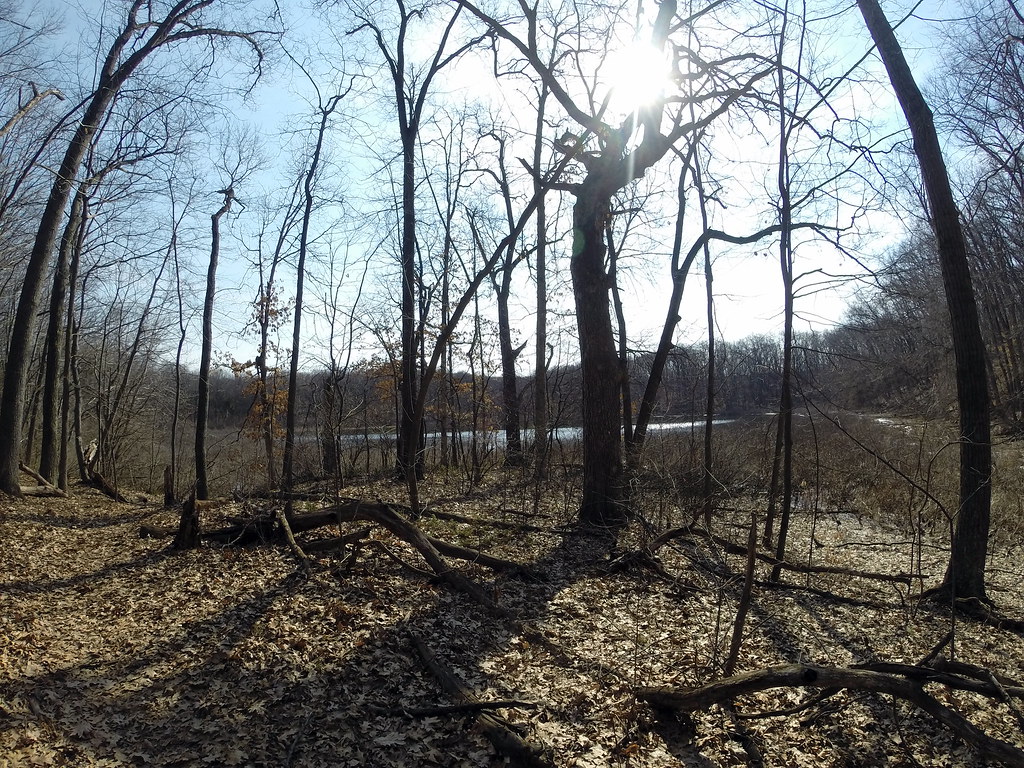 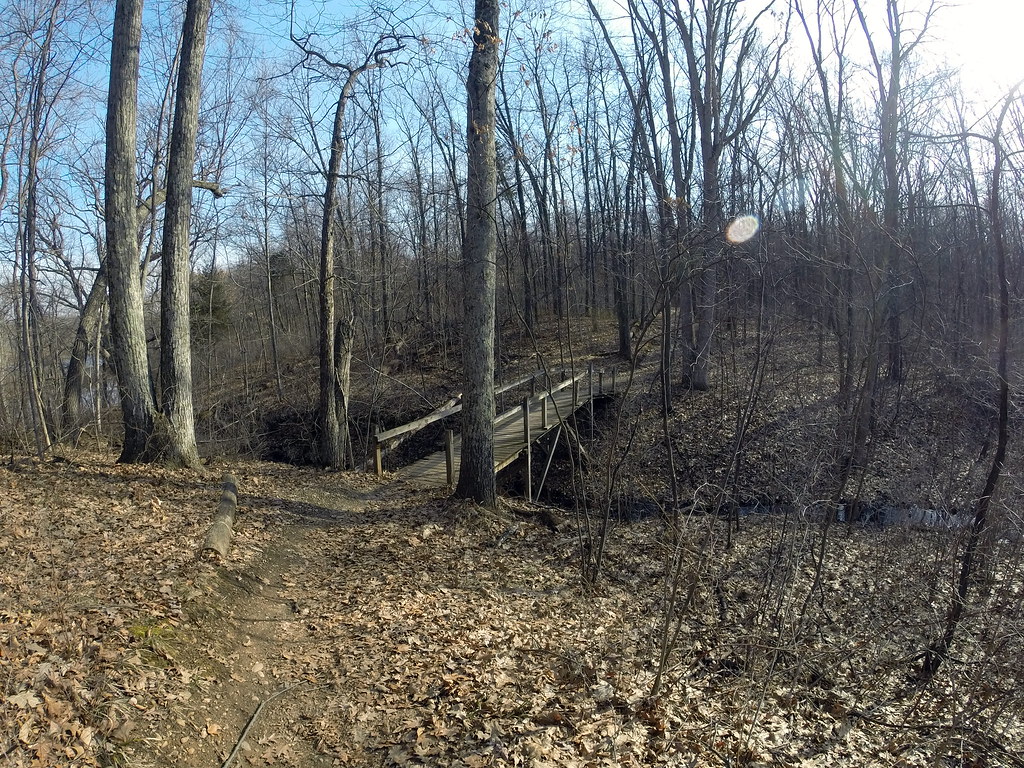 Before this year, I had never run longer than a half marathon. I wanted to improve my trail running, so I picked the 50K as a stretch goal. I have been running between 25 and 45 miles a week since October 2013 to prepare for the race, roughly following the plan I grabbed from Competitor Magazine.

I faced some nagging injuries in November and then again in March which forced me to alter my training plan just prior to the race. I ended up compressing the four longest runs into the four weeks prior to the race instead of interspersing them with 16 milers as suggested in the plan. I actually ran my first marathon distance (on the same trails) as my final long run 10 days prior to the 50K race. I did not run at all for the next 10 days to give my body a chance to fully recover.

The morning of the race was pretty chilly but clear – 34F. I had some minor pre-race jitters but I had been looking forward to the race for so long that I was ready to get started. 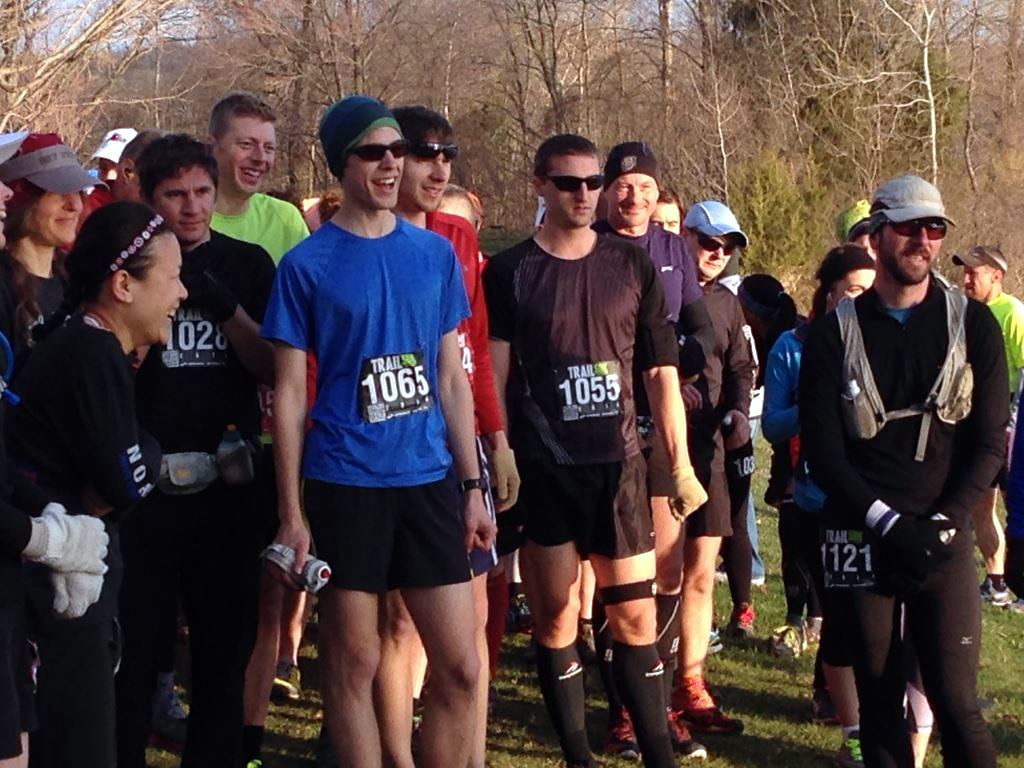 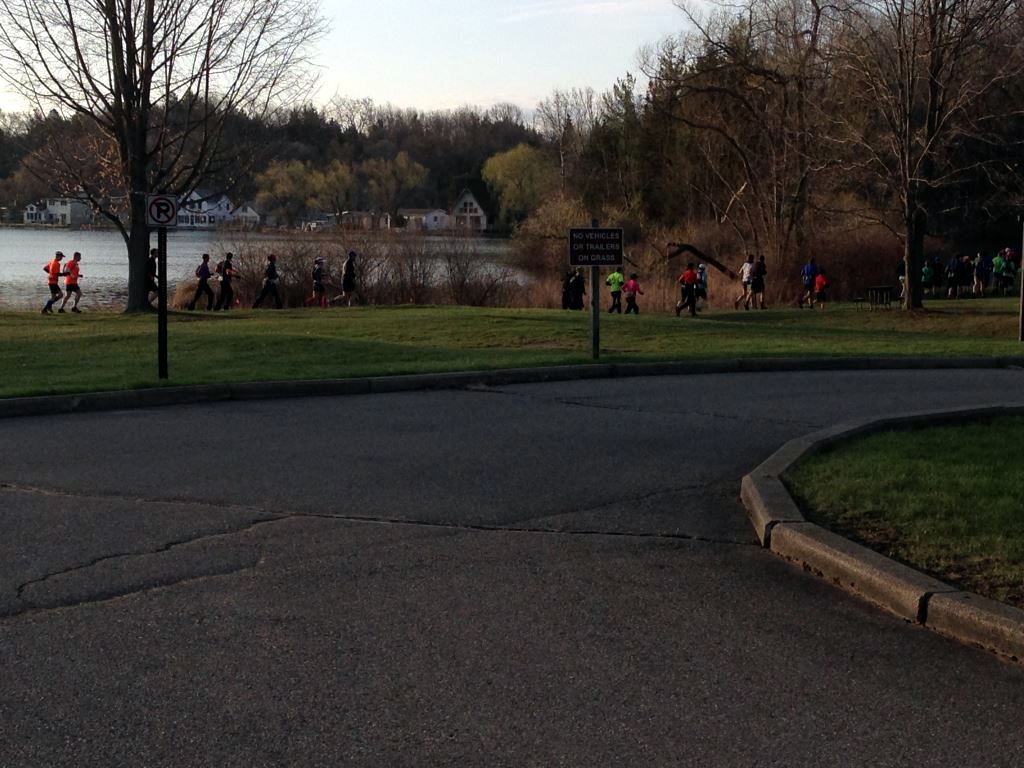 I deliberately held the pace back a great deal on the first lap – shooting for 10:20 miles based on my GPS watch. The strategy paid off, and I felt very fresh as I came around the half marathon point for lap 2. I got pretty cold though when some clouds rolled in, so I added a layer. 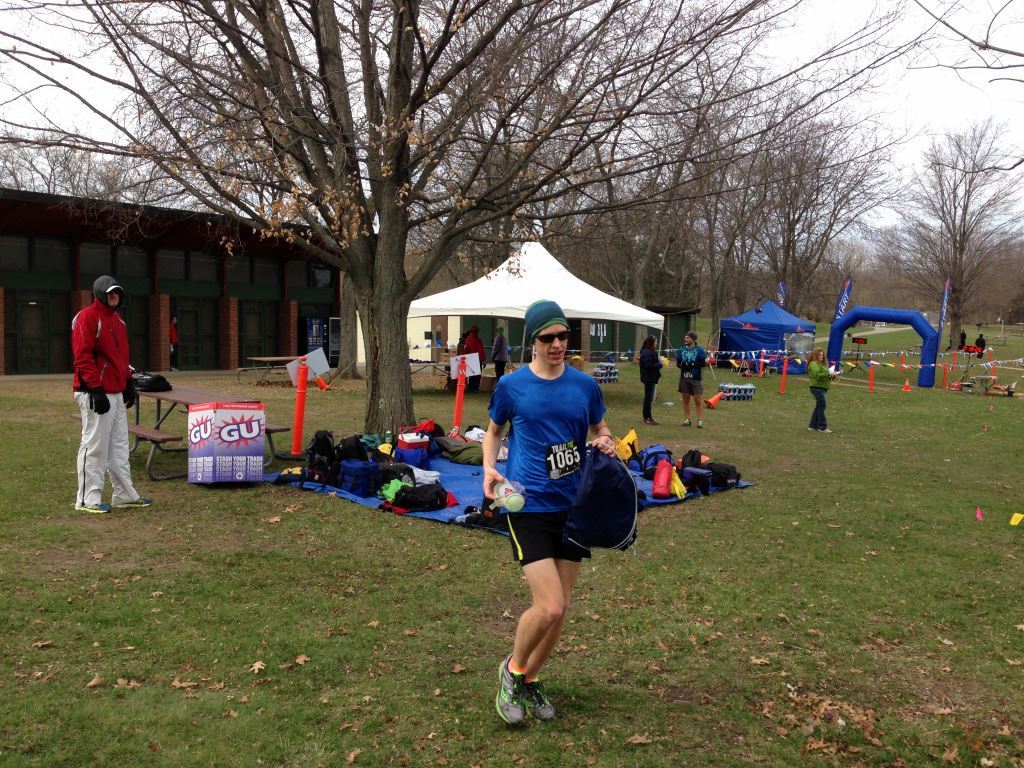 I really enjoyed the social aspect of the ultra race. Everyone I ran with for a length of time was happy to chat and that made the miles roll by more quickly than I would have expected. I ate, and ate, and ate some more, knowing that nutrition had been the limiting factor in most of my training runs. The PB&J and bananas at the aid stations made a big difference in my morale compared to the gels I had eaten during training.

I kept the pace on the second lap almost exactly as fast as the first lap. I ended up walking most of the hills, but it wasn’t as big as a disadvantage as I anticipated: it turns out that with my freak long legs I can walk uphill faster than most people can run. According to the timing results I actually passed 18 of the 48 competitors ahead of me during lap 2. I felt like I nailed the pacing and I felt really good coming into the marathon point.

At this point I had five miles to go. My legs felt a little fatigued leaving the starting line for the final, smaller, loop, but I was in good spirits. Then, a monster hill appeared in the first mile of the loop. My heart rate spiked and I had to cut back on the pace in the ensuing downhill leg. But the course flattened out for miles 27-29 which allowed me to get my speed back up. With two miles to go, I started having a little more fun on the speedy downhill descents and opened up the pace a bit in the flats. I crossed the finish line with a short burst of 5:30 pace, which confirmed for me that I had a little bit left in the tank after the 50K distance. Perfect!

I crossed the line in 5:24:52 which is right in the middle of the 5-6 hour window I was expecting based on my training. I was happy to learn that I actually placed in my age category – 5th place among 20-24 year old males, and in the upper 30% of males. Not bad for my first real athletic competition since high school swimming in 2009 (and my first foot race, ever)

I am really happy that I pushed my limits in training and ultimately achieved my goal of running an ultra. I had been visualizing crossing that finish line for months, and it felt great when I finally was actually able to do it.

However, I gave up a lot to be able to train that much. In particular, I cut back on my climbing in the gym and spring cycling in order to devote more time to running. I had enough fun during the 50K that I would consider doing it again in the future, but I am not sure that I will keep running ultras on a regular basis.

The best outcome for me is that I can now run trail distances from 13-20 miles virtually at will even if I cut way back on my training mileage. This will open up all sorts of possible day hikes and mountain runs when I move out west, and I really enjoy the shorter “fun runs” where nutrition and support is less important.

Did I mention that I had a GREAT support crew? My parents came out to watch, as did my informal coach Stacie and a couple of my other friends. Seeing them cheering me on every 13.1 miles made a big difference in my motivation and got me running that much faster.

Spring is finally here, which means it is shorts weather and I can finally start running on dry trails again! I headed out to Cedar Bend Nature Area in Ann Arbor for some hill training in preparation for an upcoming local ultra race.

The park can be accessed from the Baits university bus stop, from Cedar Bend Drive off of Broadway street from the west, or from Fuller Park via the Island Park bridges. I can envision some fun loop runs connecting this park with the Arboretum and UM’s North Campus.

Ann Arbor is still in the grips of the best winter in recent memory (or worst depending on your point of view) but I am getting a little ready for a change of scenery. Luckily, I’m headed to Utah for some skiing in a couple of weeks, but in the meantime, I found a spot for some passable tree skiing right on campus!

On Thursday, conditions were perfect for cross country so I did a few miles in the Arboretum while recovering from a slight running injury that has me sidelined from my usual exercise this week.

Tuesday was the first time class had been cancelled due to weather at the University of Michigan since 1978 as wind chills dropped to -30F. With nothing else to do, I grabbed my skis to check out a couple of areas of interest in the Arboretum, right near the UM Hospital. There are some fairly steep hills, and a couple places I thought I might be able to take advantage of this winter’s deep layer of powder. Unfortunately I was mistaken.

The area I thought would be nicely gladed out had been left with dozens of closely-spaced stumps sticking out of the snow about 6 inches, making it difficult to ski. I found some other lower-angle terrain which was more clear but not fast or long enough to be interesting. There are some tremendous steep bluffs down to the river, but those are all choked with brush and fallen logs. With Michigan’s snow pack being too thin to cover up the bushes, it’s no wonder that I don’t see many skiers in the park. I’m glad I gave it a shot though.

The Huron River is essentially frozen solid, which is impressive to me. What a great winter it has been!

This weekend I had the opportunity to check out the world of ice climbing in a somewhat controlled environment at the Peabody Ice Climbing club in Fenton, MI. I had never climbed ice before, but learning on top rope was not as intimidating as I would have thought. There’s a 30′ tower and a 70′ for the more adventurous, along with a mixed climbing area. I had such a good time and I’m stoked to try it again soon.