We left Seattle at around 8am on Saturday and headed for the ranger station in Sedro-Woolley to pick up some “blue bags” (human waste disposal bags), then headed back out to the Mt. Baker trailhead.

The lower route is snow free for several miles and thousands of feet. We hiked with heavy overnight packs, skis, and boots on our backs along the Scott Paul trail, with a couple of blowdown logs to cross before breaking out onto a ridge where the trail turned into a steep, muddy bushwhack. Eventually, early in the afternoon, we reached continuous snow and put our skis on to continue the trip to our high camp.

I’d estimate that we skinned another 1000’ feet to our campsite at Crag View, 6500’ above the visible Pacific Ocean below. The biggest hazard today was the heat! Most of us yanked off the pant legs and skinned up the lower Squak Glacier in shorts. We did rope up in an overabundance of caution as we stepped onto the Squak for the last 300’ or so into camp. Hey, we need the rope set up for tomorrow morning anyway right?

Holy Cow, what a campsite! The views over the Strait of Juan de Fuca and the San Juan Islands were amazing, and the icefalls, volcanic prows, and crater rim of the volcano greeted us high above. We set up camp on the warm, dry rocks and started melting water to rehydrate from the hot day. 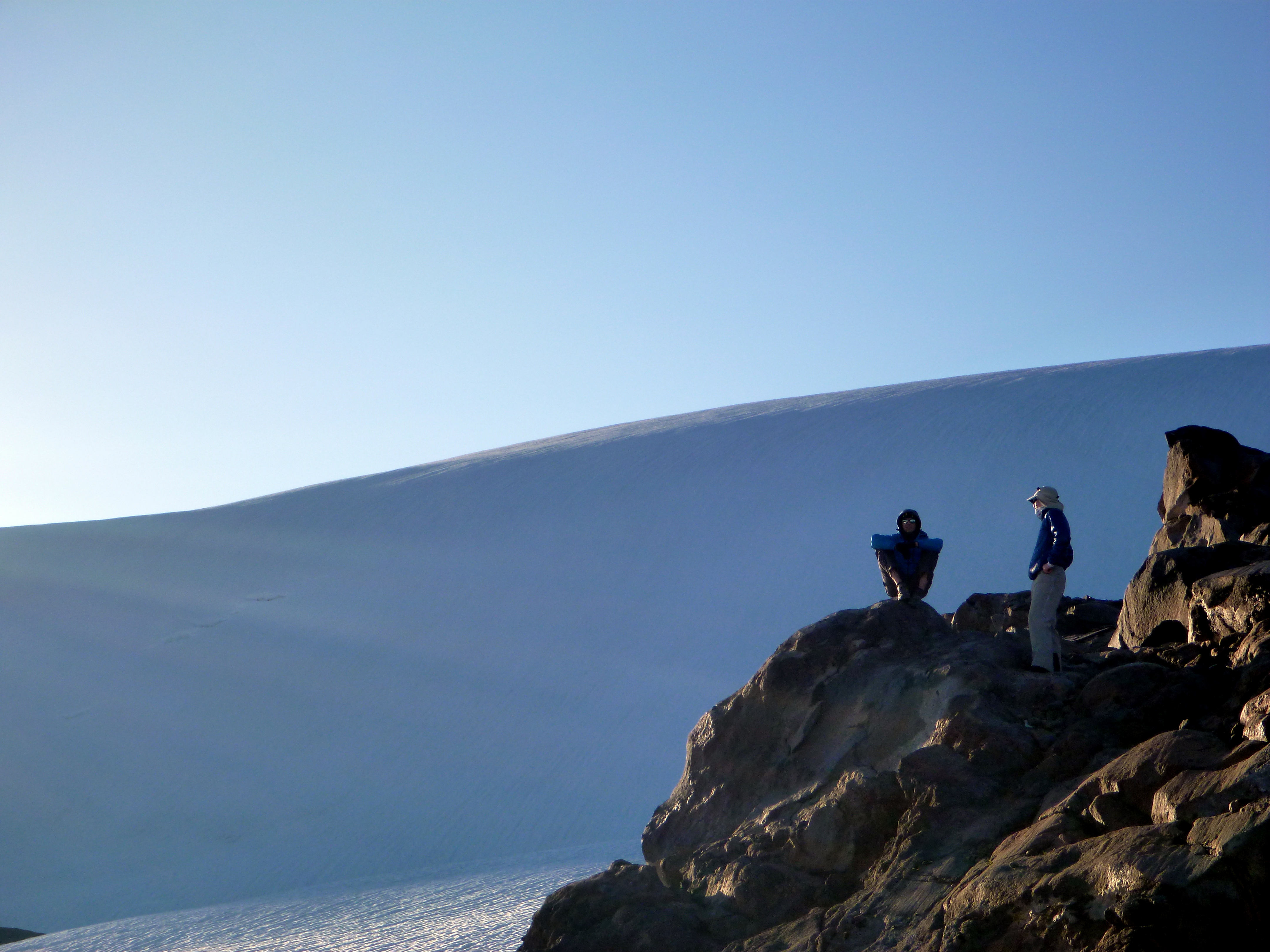 This was a great group – relaxing in camp and chatting was a good way to pass the time. After dinner, the sun set early behind the Easton Glacier’s prominent ridge and the temperature got a little bit chilly.

I enjoyed the glow across the ocean and the evening light on beautiful Mt. Shuksan, not far away.

The views expanded further into the North Cascades, reaching all the way to the remote Picket Range further east along the crest.

The alarms rang at 4am on a blustery morning and we repacked our much lighter packs for the day ahead. High clouds greeted us as the sun started to rise, with unsettled weather coming in from the south.

I ate some quick food, threw my harness on, and roped up with the other two members of my team. Ski crampons were perfect in the hard frozen snow on the ascent, inspiring confidence as we traversed on steep-ish snow slopes above gaping crevasses in some spots.

We moved efficiently up to the 8900’ level on the Squak where Chris easily found a way across the “crux” crevasse on the lower mountain.

We started a high traverse climber’s left, keeping our distance from cliffs at the south end of the crater rim until joining up with the Easton Glacier route right at the crater rim saddle.

Along the way we spotted dozens of tents on the Easton – what a contrast from the wilderness campsite we had enjoyed the night before!

It was pretty clear that the upper mountain was not going to soften up due to the high clouds and fairly low temperatures, but I resolved to head up anyway, knowing that I could always use crampons on the way down if I didn’t like the looks of the ski slope. We switched from skis to boot crampons and put our skis on our backs for the final push up the 1000’ Roman Wall. Good snow made for efficient travel, but the right side of the route we had planned to ski was very broken up by crevasses – instead, we traversed far left to the place where the Roman Wall joins up with the Coleman-Deming route and booted up higher from there. There were a couple of bridged crevasses, and a section on the C-D side that we had to cross pitched up above 40 degrees for a brief section.

I knew by now that I would be booting it on the way down – a pile of wet slide avalanche debris guarded the entire Roman Wall and the traverse back to our route. A fall from here caused by the icy, hard snow chunks would result in a long slide down the wall and potentially a trip into a crevasse – simply too risky for my personal tolerance and level of skiing ability at this point.

Eventually we crested the top of the wall and headed for the false summit bulge. The wind picked up, but we could see the true summit and dozens of other climbers and skiers taking photos and relaxing in the views of the North Cascades. 30mph winds threatened to throw me off balance with my skis acting as miniature sails on my back as I took summit photos with the crew. The flat walk across the summit plateau led me to the true summit at around 11:30am. There I was, amazingly happy to be standing on my first real mountaineering peak!

And savoring the prospect of a long ski down the perfect smooth snow of the Squak Glacier even if I didn’t have the skill/confidence yet to ski off the very summit.

We backed down to the low spot below the summit to eat lunch and relax as sun started to barely peek through. After about half an hour, we knew that the upper Roman Wall wouldn’t soften as the clouds rolled back in. Wanting to avoid the impending weather, we all decided to head down now. We also all agreed to boot down in crampons together, deciding that even if the conditions were theoretically skiable, why chance it if it wouldn’t be any fun on the scratchy ice. We saw some skiers ski from the top, but it really didn’t look like very much fun. We booted down about as fast as they skied it I think.

Halfway down the Wall, the snow suddenly softened and we had crossed below the worst of the chunky avy debris. We decided that this part looked skiable and fun, so we transitioned to begin the trip down at ~10,400.

We crossed two bridged crevasses on the Roman Wall proper, then traversed hard skiers left to cross the huge gaping crack at the bottom of the wall on a thinning snow bridge. Crossing it unroped was exciting for sure. Now on more moderate slopes, with thousands of feet of corn snow below, I finally smiled and relaxed a little bit. I had successfully and safely negotiated the Roman Wall, even getting the chance to ski part of it, and I was thankful for conservative decision making by the rest of the group.

The descent back to camp started as perfect corn on the upper Squak, with not many cracks to avoid as we followed our track back down the mountain. Chris went first to scout a path, and Radka would follow to set up to take photos of us on the way down.

One by one, we hooted and hollered our way down the groomer-like glacier until the snow started to get slightly too heavy and wet just above our camp. We skied right to our tents at around 2:30, packed up within the hour, and skied another thousand feet back to our shoes at the Scott Paul trail. Skiing with a fully loaded overnight pack is a real quad burner.

The most dangerous part of the trip was probably walking down the muddy, steep climber’s trail with our 50 lb packs! All four of us students fell within about a 2 minute stretch before reaching the more nicely graded official trail.

We cruised down to the cars, reaching them at about 5:30pm before loading up for the trip to a taco place in Sedro-Woolley.

Thanks so much to Chris and Radka for showing us the way and for taking a great ski weekend to spend it with us noobs! And especially to Radka for lugging the DSLR up the mountain and making my pics look like amateur hour by comparison.