This labor day weekend called for clouds and showers all over the Puget Sound. Lacking a partner to tackle the remote peaks of the Pasayten Wilderness like I had originally hoped, I opted for a safer, less remote hike through the mountains of the Teanaway.

Situated north of the city of Cle Elum, east of the Cascade Crest, the  Teanaway River watershed is protected by the rain shadow of the range to the west. This means that it has consistently better weather than other areas of the Central Cascades. It is full of great non-technical scrambling peaks. I’ve visited this area several times before and it’s one of my favorite areas in the state.

My plan was to camp overnight on Friday and do a mostly off-trail loop combining as many peaks as I could in a one day push. Traveling alone, I wanted to avoid anything with much exposure of difficult scrambling. My list included Judi’s Peak, Mary’s Peak, Bean Peak, Devil’s Head, Bill’s Peak, Teanaway Peak, and Iron Peak, although I figured I wouldn’t get to all of those. Here’s a map of the trip I actually completed:

I walked in the night before and found a campsite about a half mile from the car, just prior to the Bean Creek turnoff. I should note that the Beverly Creek trailhead is accessible by a pretty rough road – I engaged my AWD system in a couple of spots. I was fine in my CRV (fake SUV) but those with Priuses should probably consider whether a couple of nasty spots are doable or not.

My day started out with these two minor peaks, anchoring the western border of the Bean Creek basin. I left camp, crossed Bean Creek, and almost immediately left the trail and proceeded straight up the fairly open southwest ridge of Judi’s Peak.

Routefinding here consisted of the “just go up” strategy. I tried to stick to the top of the ridge but dropped off to either side in a few places to avoid some scramble steps (in the interest of being conservative on  a solo hike).

After about a mile and 2500′ of elevation gain, I reached the summit of Judi’s Peak and kept moving along the ridge to Mary’s.

One of the best things about the Teanaway is its proximity to the much gnarlier Stuart Range to the North, across the Ingalls Creek valley that runs the whole length of the range.

After summiting Mary’s, I dropped off the southeast slopes around 400′ into Bean Creek basin to avoid some difficult scrambling on the ridge between Mary’s and Bean Peak. The subsequent sidehill traverse was pretty short and I’m confident it was quicker than sticking to the ridge (which I would have considered if traveling in a group).

The climb back up to Bean Peak’s summit from the valley wasn’t bad at all. The rock is awesomely grippy. This would be a great candidate for a beginner’s first scrambling peak (could probably go at Class 2 with careful route selection).

Bean’s summit usually would afford a great view of the Stuart Range, but the clouds were dropping in so I didn’t stay long. I had visited this peak two years ago and it was my first “scramble,” so I relived fond memories before continuing north along the easy climber’s trail toward my fourth peak of the day: Devil’s Head.

This next portion is a pure peakbagging objective – I can’t think of any reason why you’d bother climbing Devil’s Head otherwise. I suppose the view angle up and down Ingalls Creek is sort of unique.

DH gets its name from its elevation  – 6666′, although it does look like a devil with horns on the topo map. It’s a rounded pile of loose rock with an easy climbers trail right up the middle. To get there, you have to either traverse the top of Volcanic Neck ( a more challenging scramble) or skirt it to the east on scree. I chose the latter option and didn’t find it too tricky. At the saddle to the south of Volcanic Neck there is a faint climber’s trail which makes negotiating the loose slope much easier.

I stood on top a few minutes later, ate a snack as I checked out the beautiful Ingalls Creek valley, and turned around to rejoin the established trail at the saddle south of Volcanic Neck.

I had been watching the weather deteriorate all morning as the clouds got lower and lower, but as I reached the intersection with the Hardscrabble Creek trail, it started to rain pretty hard. I thought it never rained in the Teanaway! Reluctantly, I put on my rain gear and cruised through the Fourth Creek valley towards Fourth Pass.

I sat under a tree at Fourth Pass and considered my options. It was not even noon yet, so I had plenty of time to bag a couple more peaks. But as the rain continued, I realized it would be a bad idea to tackle the more challenging scrambles of Bill’s Peak and Teanaway Peak on wet rock. Luckily, Iron Peak has a foot trail right to the top and is a rare, literal “walkup.” I decided that would be my last stop of the day before calling it quits. 5 summits isn’t bad, right?

I descended the Fourth Creek trail to the intersection with the Beverly Creek trail, turned northwest, and joined the Iron Peak trail in less than a mile for the climb to the Iron Peak saddle. From there, I turned due south and walked up following cairns and a very obvious use trail. After around 400′ more gain, I was writing my name in the Mountaineers summit register, beautifully machined and chained to the rock.

I didn’t stay long since the views were less than impressive in the thick cloud layer. About an hour from the top of Iron Peak, I reached my campsite at the intersection of the Beverly Creek trail and the Bean Creek turnoff. Of course, the weather steadily improved once I descended from the higher mountains and by the time I got to camp it was sunny again. Perfect for spending a couple of hours with a book. 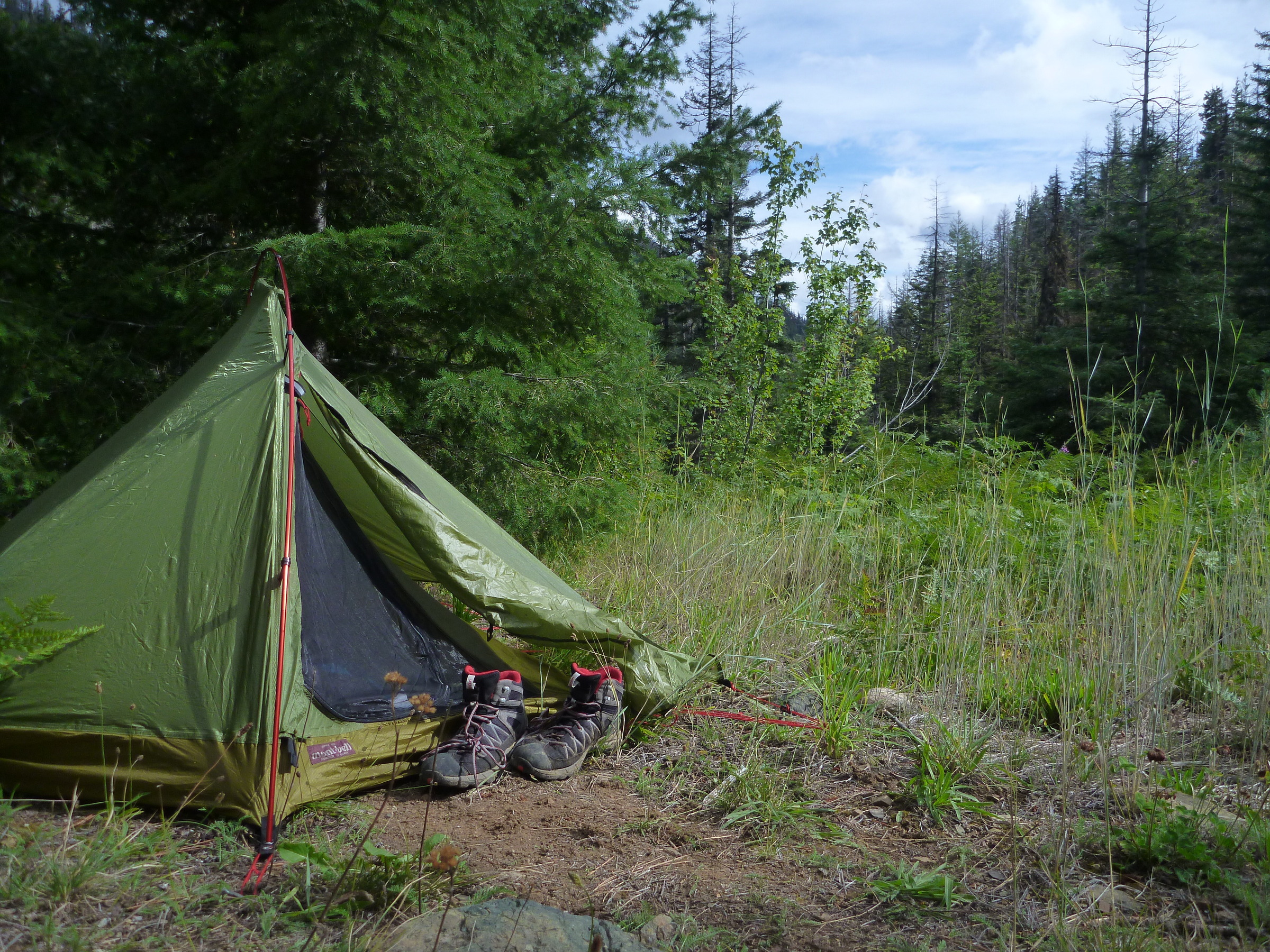 Unfortunately, the brief reprieve didn’t hold. Around 5:30 it started to rain again. Since the conditions tomorrow would appear to not be ideal for climbing more peaks, the idea of cooking my macaroni in the rain and being stuck in the tent alone with my Kindle for the night didn’t appeal. So I packed up and bailed to my car 0.5 miles away for the trip home. I guess that’s the nice thing about backcountry “car camping.” After a dodgy trip over Snoqualmie Pass in the driving rain, I was warm and dry in Seattle.