Day 8: Lobuche to Everest Base Camp (5300m)
Today is the day! We reach our goal after over a full week of ascending. We started from Lobuche in the morning, passing through flat to rolling but difficult glacial terrain on the way to the highest tea house at Gorak Shep (5100m).

From here we can finally see the crest of the range and the Tibetan border: Pumori to Everest forms a darn impressive looking ridge.

After 2 hours we reached Gorak Shep, where we dropped packs, ate, and got geared up for the Base Camp side hike!

We crossed a spooky dry lake bed before traversing left high to avoid the Khumbu Glacier. The ice wall of Nuptse rises high to our right. 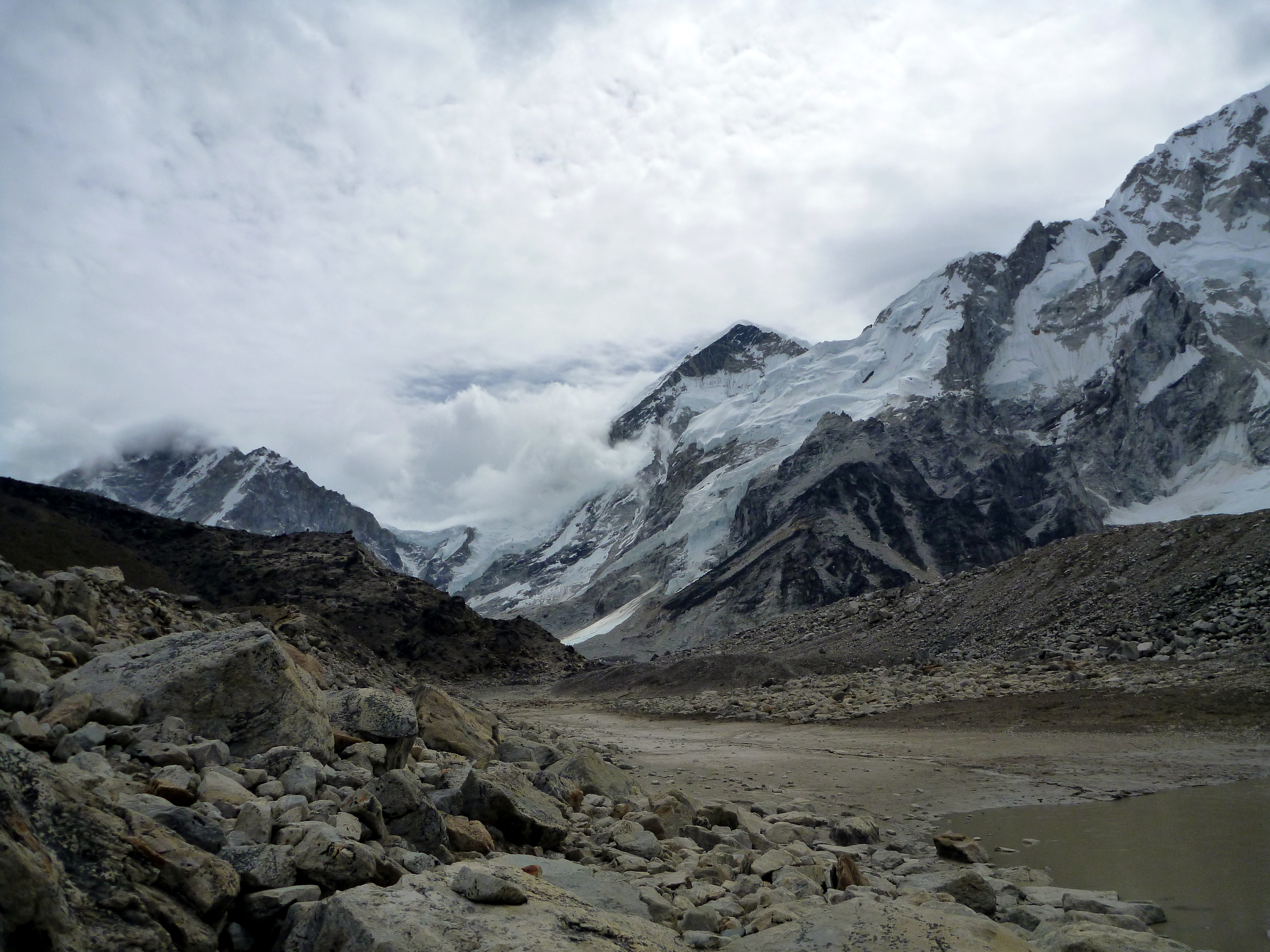 Continuing along rocky terrain, the Khumbu ice fall and the start of the Everest climbing route comes more clearly into view.

After two hours, we came to a descending traverse to the glacier under a muddy, rocky hill. We were warned  “don’t stop!” due to the presence of rockfall danger. I have to admit it is one of the sketchier places I have been in the mountains. Finally, we came to a point on the glacier where our map was marked base camp. We heard ice and rock chunks falling periodically as the day warmed up. DB decided this is as far as it was safe to go, and we agreed! We got to the spot on the map – mission accomplished! 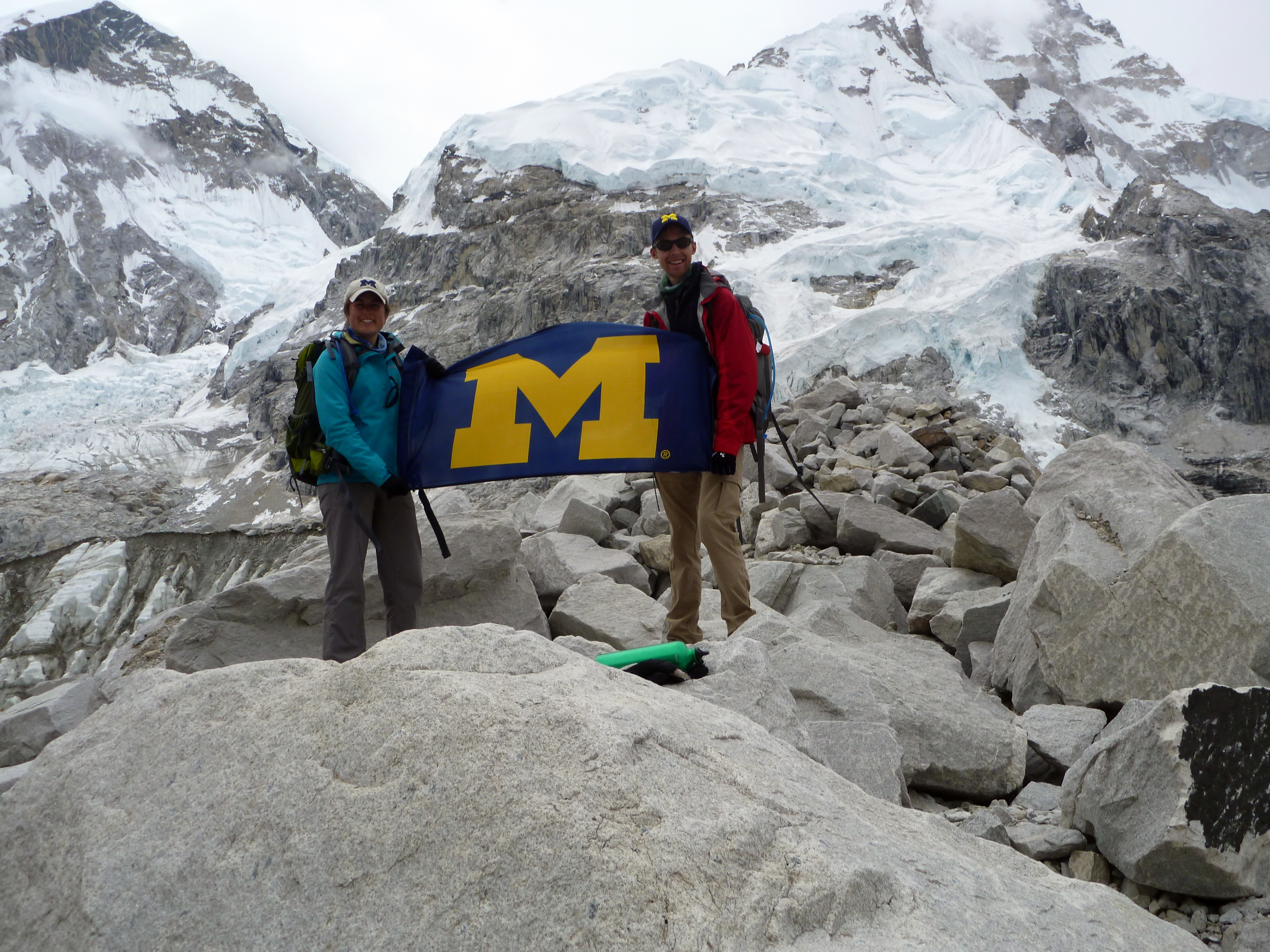 Apparently a bit further on is a small sign and shrine with some stuff people have left, but in the unstable monsoon heat, continuing the risky glacier crossing wasn’t worth it to us. Retreating quickly, we found a better photo op a bit further back with some prayer flags. 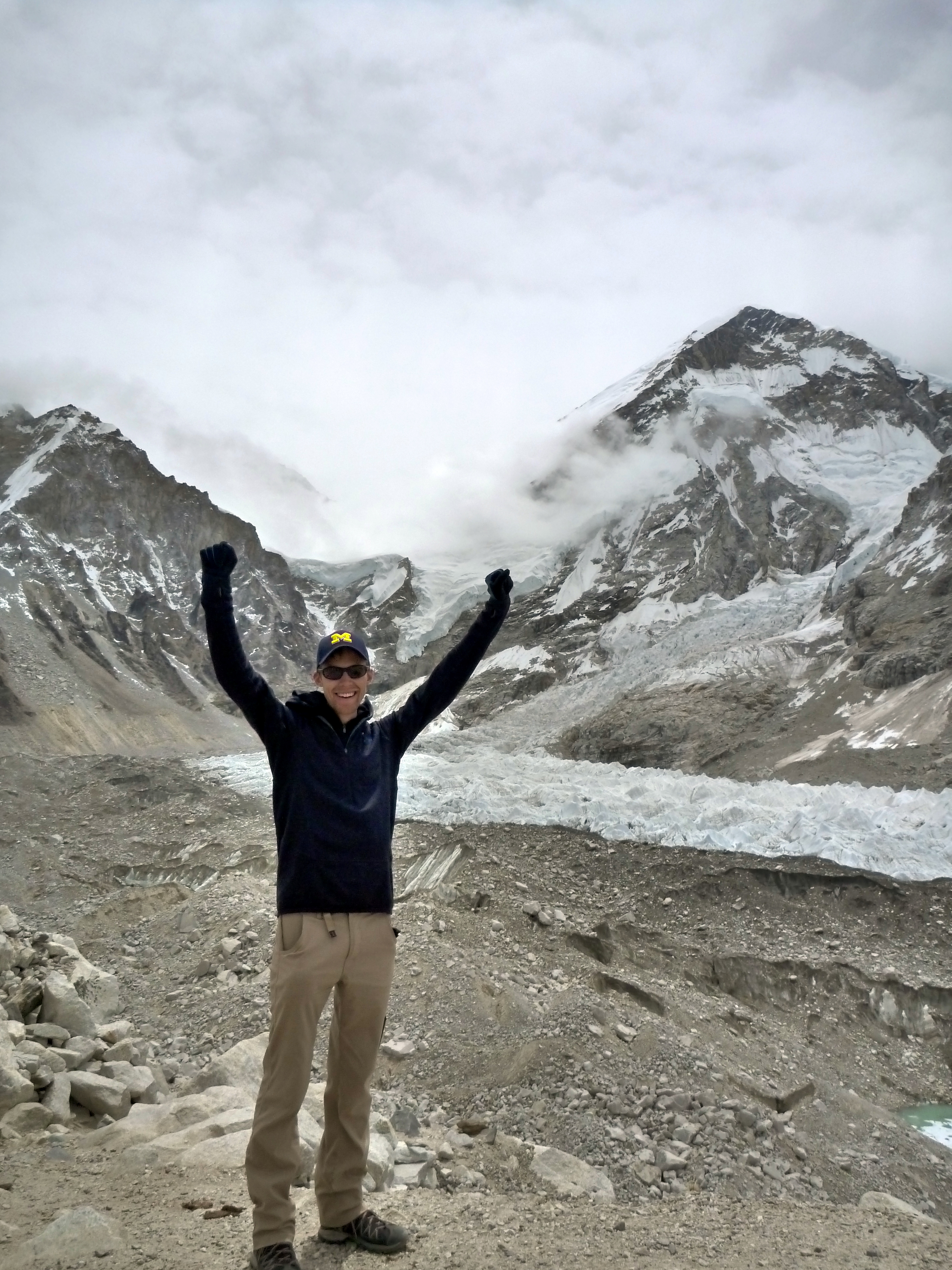 Overall, Base Camp itself is pretty anticlimactic, but that is what we had been told. Even from the sign you can’t see the summit, and in the non climbing season there isn’t even a tent city to see. But we saw the ice fall, the Khumbu glacier, and walked where mountaineering pioneers walked. Not a bad day in the mountains.

The clouds lifted a bit on the way out, affording even better views! 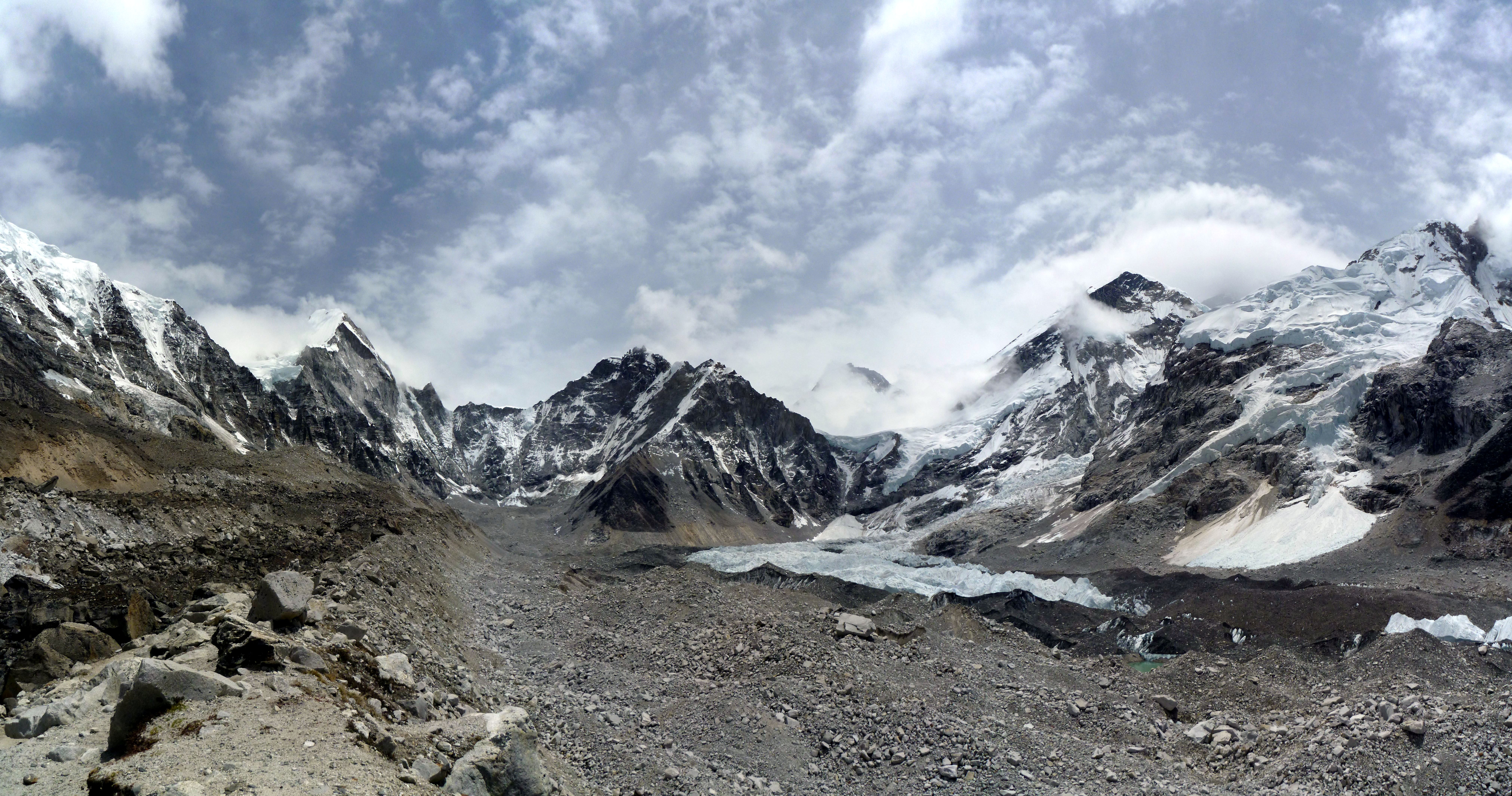 Originally we had hoped to hike Kala Pattar this afternoon if the weather is clear. Unhelpfully, it snowed, so we paid for 30 minutes of slow WiFi to get a “we made it” email to our families. Gorak Shep has the worst food of any place we visited on the trek! Unsurprising, but we were ready to begin the descent the next day.

Day 9: Kala Pattar (5600m)
We woke up ready to hike with our warm clothes on at 3:45 and started walking at 4. A coating of snow reflected the full moon light as we started on the first set of steep switchbacks up the scree pile known as Kala Pattar. Really a minor sub-peak of Pumori, Kala Pattar is well known as a fine vantage point for Everest’s summit. 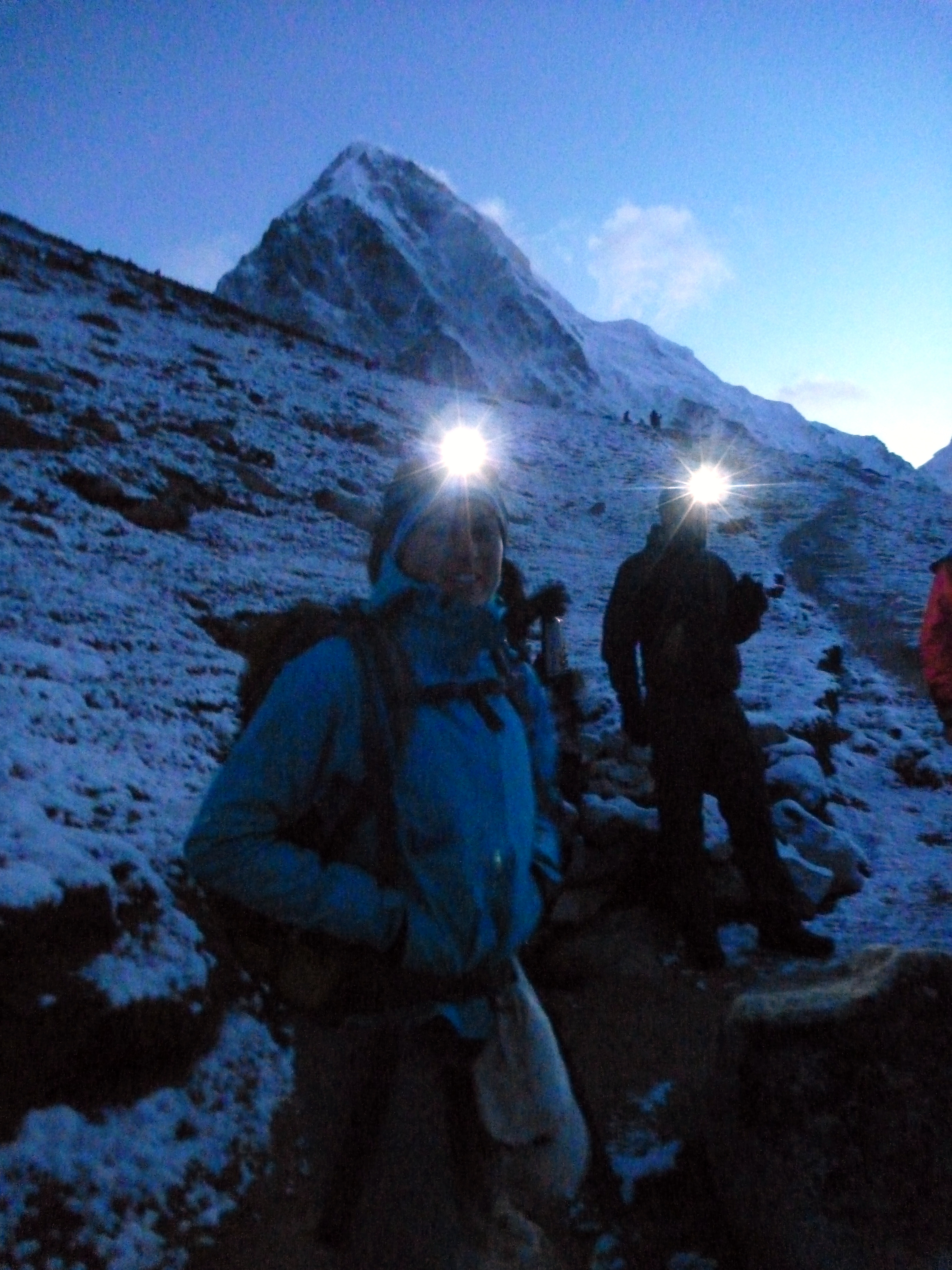 The weather was perfectly clear. Not a cloud in the sky obstructed our view. I couldn’t believe our luck and hoped only that the clouds would stay away long enough for the sun to rise. As we climbed slowly, hearts pounding, lungs struggling in the cold, thin air, the glow of dawn began to illuminate the tops of the east faces of the high peaks. 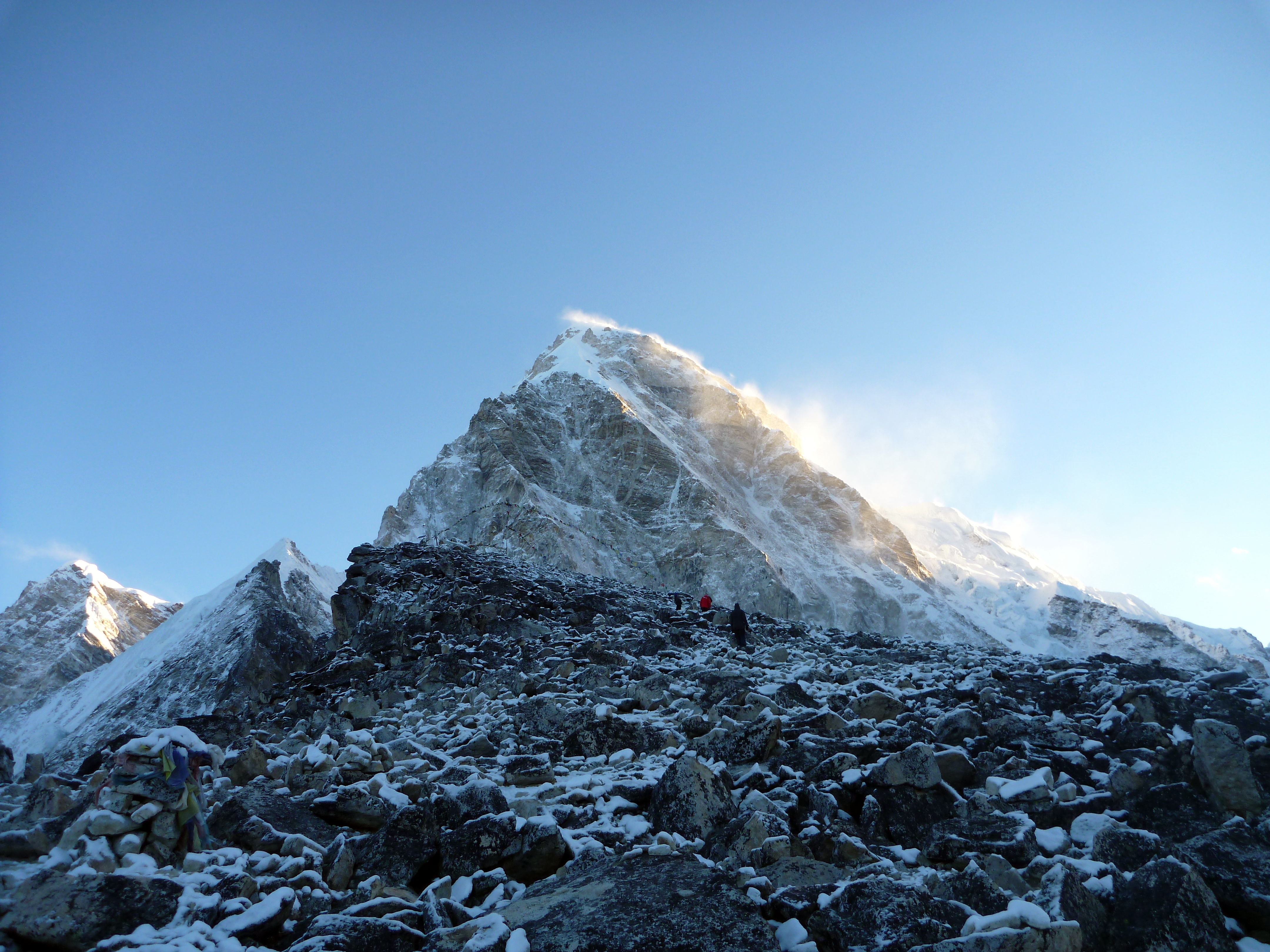 But Ama Dablam, the world’s most beautiful mountain, stole the show.

After about 90 minutes we summited! My altitude record for the foreseeable future. The summit is actually pretty airy on the back side, and Pumori lends an epic touch to any summit shots. 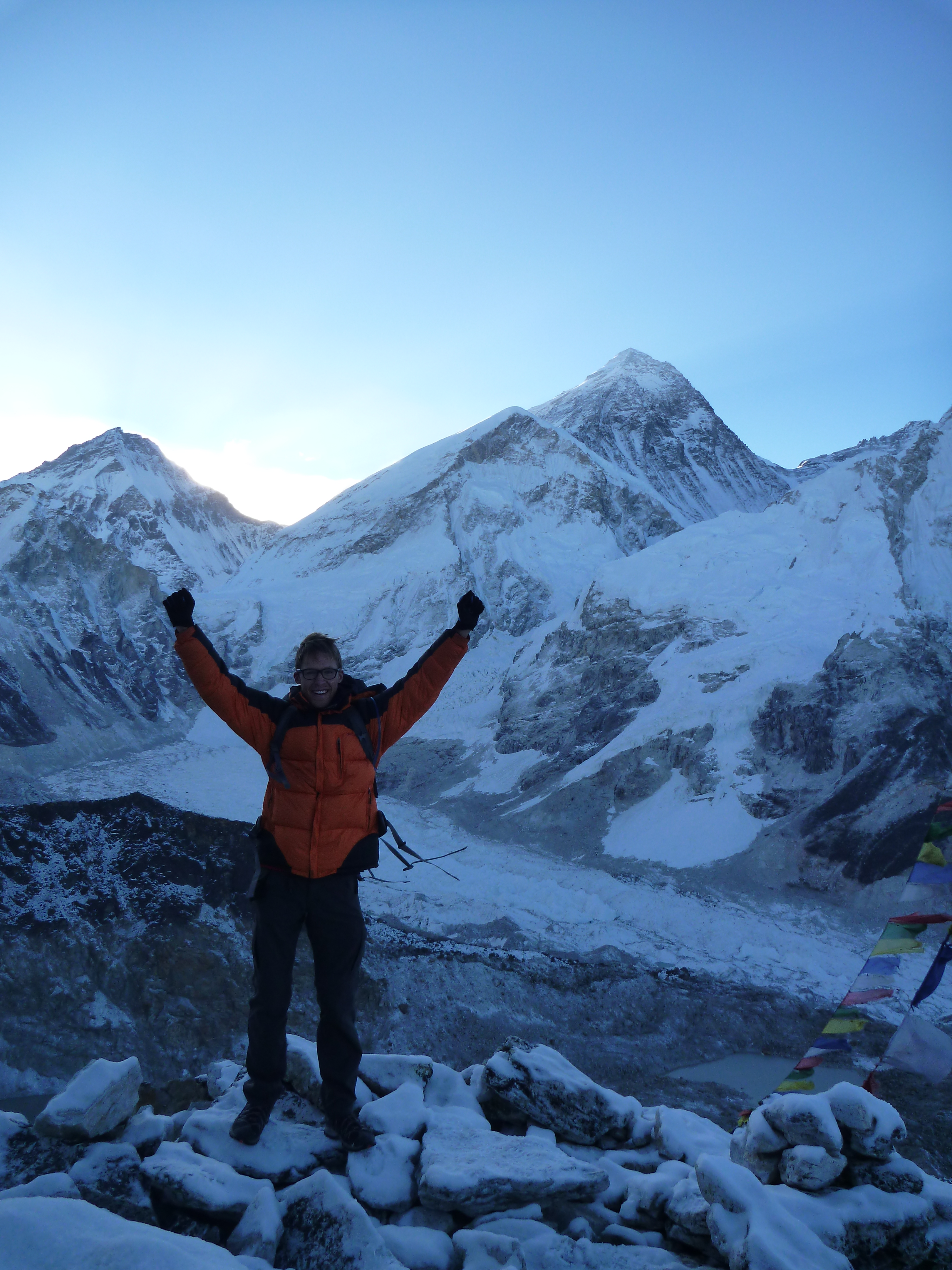 It was extremely windy and cold on top. The down parkas were a real godsend. Both of us were not the most conscious we have ever been up there: probably a combination of altitude, exertion, and emotion. 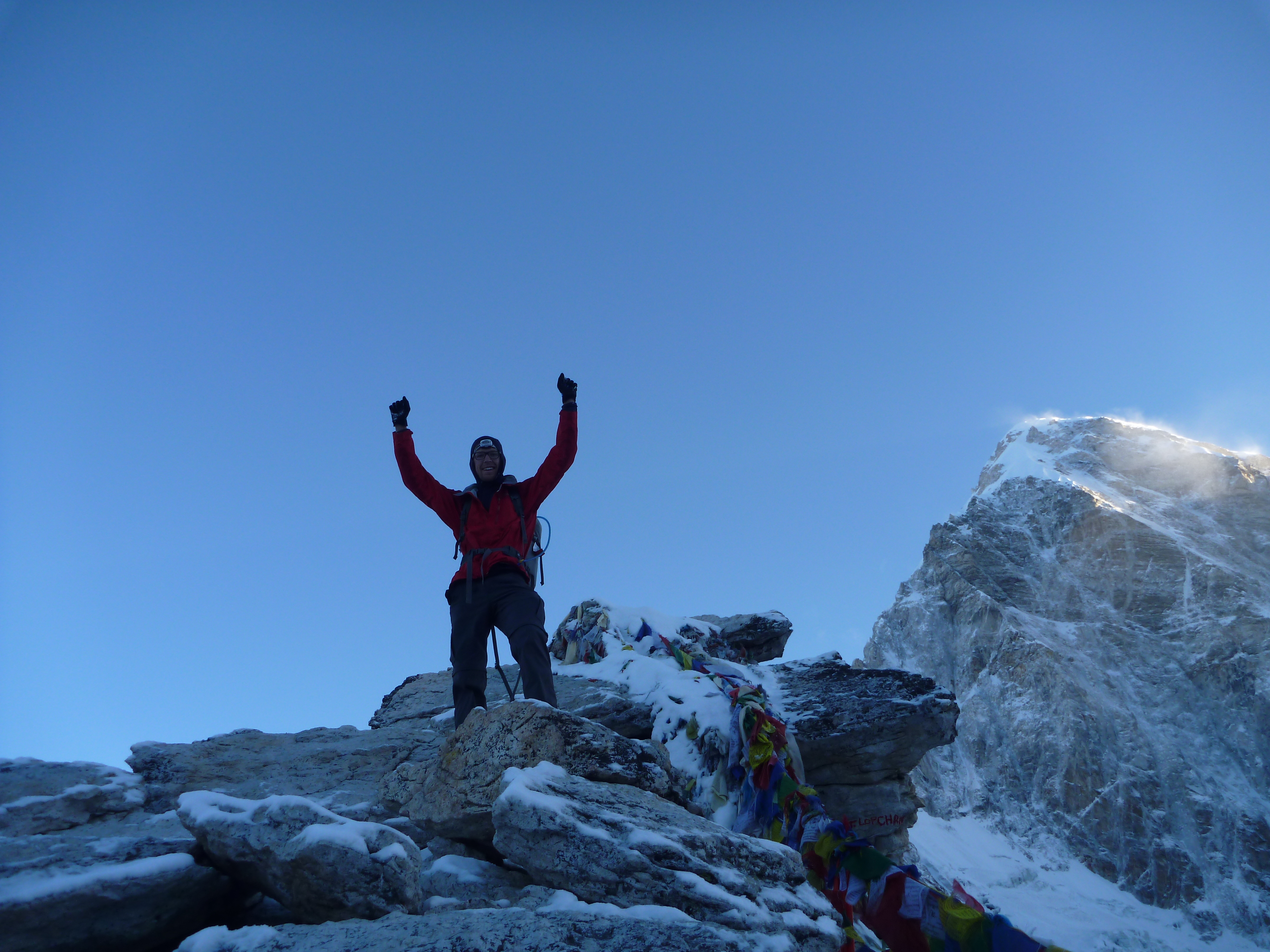 Oh yeah… you get a pretty good view of Mount Everest from here. 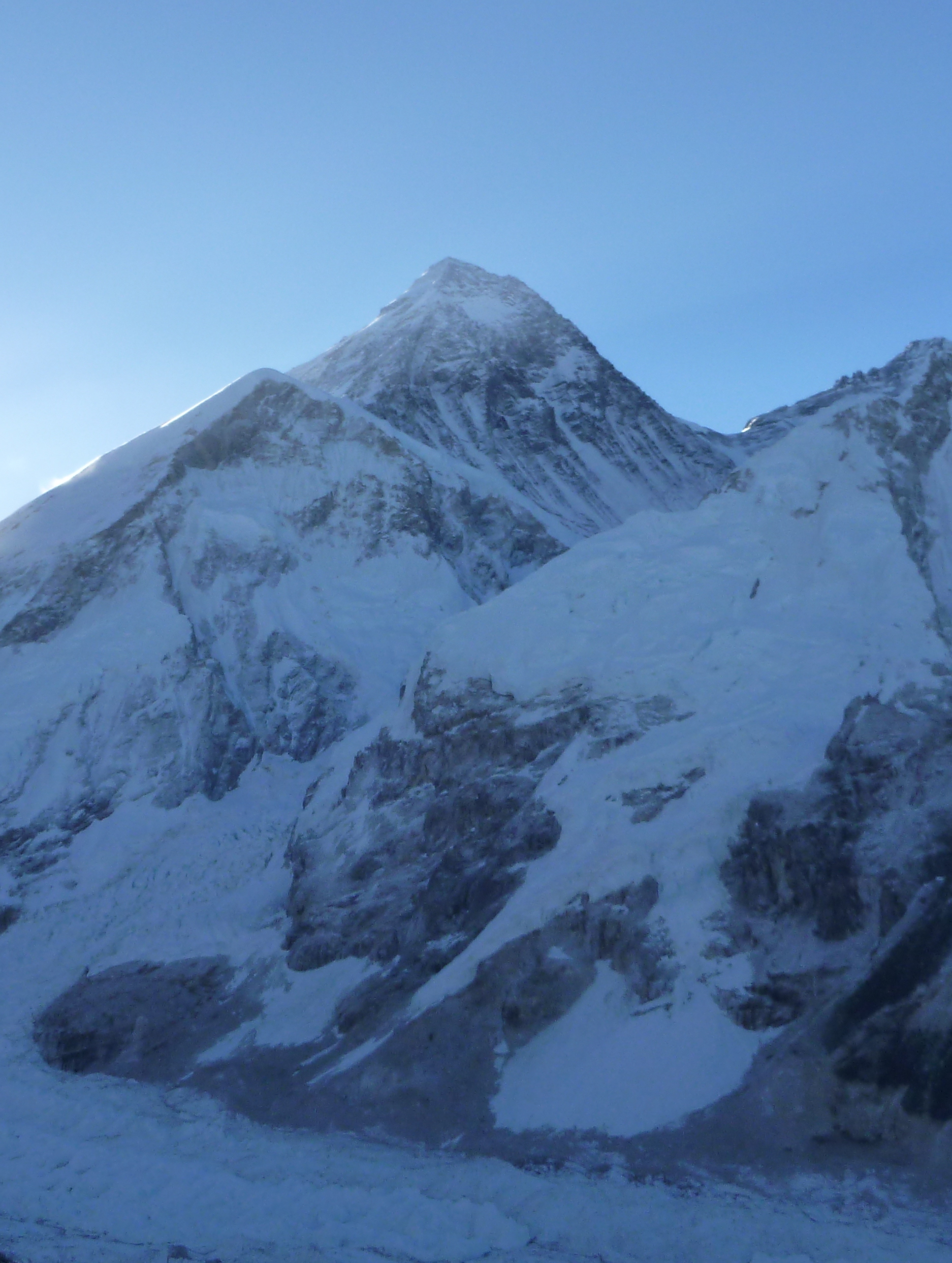 We took some cheesy school pride pics to get into the alumni magazine.

The sun hasn’t actually risen yet, which is good because it would have washed out most of our pictures. But on the way down, it did, which produced this nice effect 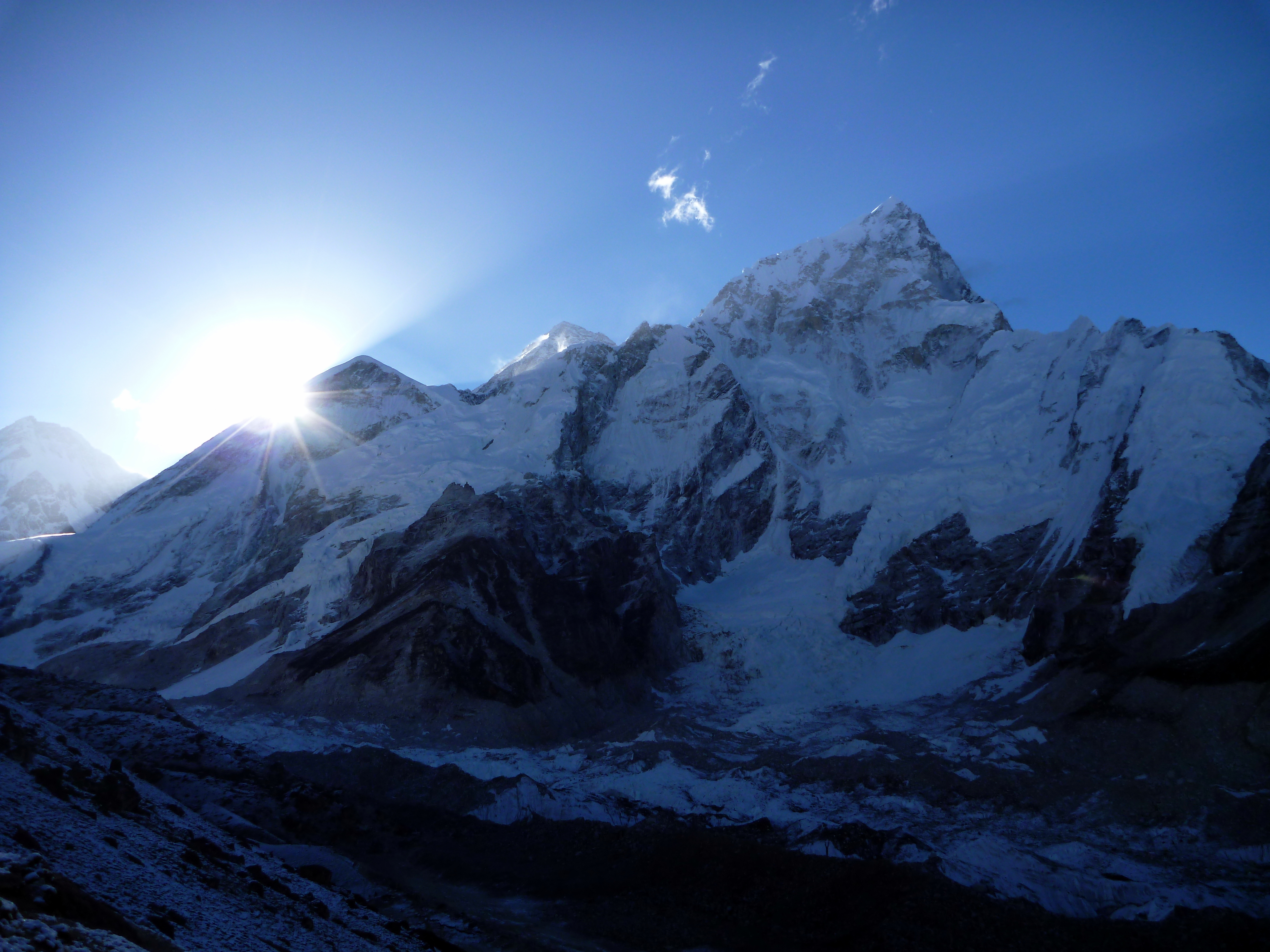 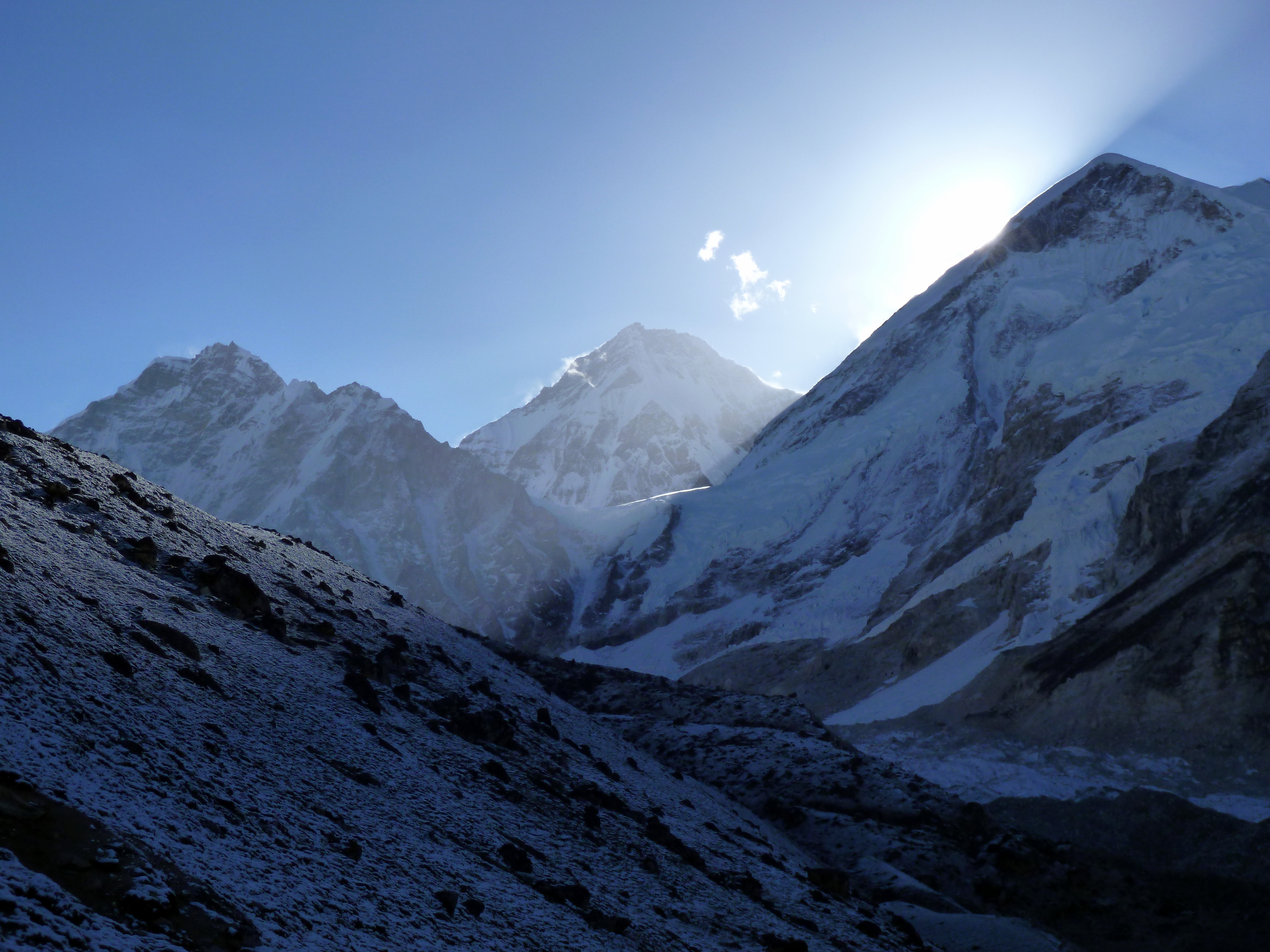 Looking back on Kala Pattar from Gorak Shep, it was easy to be proud with our achievement. Now all we had to do was walk downhill.

One thought on “Everest Base Camp Part Three: Lobuche to Base Camp”