Day 1: Kathmandu to Lukla to Phakding (2600m)
We woke up early again to get on the first flight to Lukla. Yesterday, the flight was finally cancelled around noon. That was not a problem. The flight to Lukla is so notoriously unreliable that we built in a few extra days before and after the trek. It was like the movie Groundhog Day: one delay was announced after another,  and we were sure that we would be trekking to Annapurna Base Camp instead, as our backup plan. 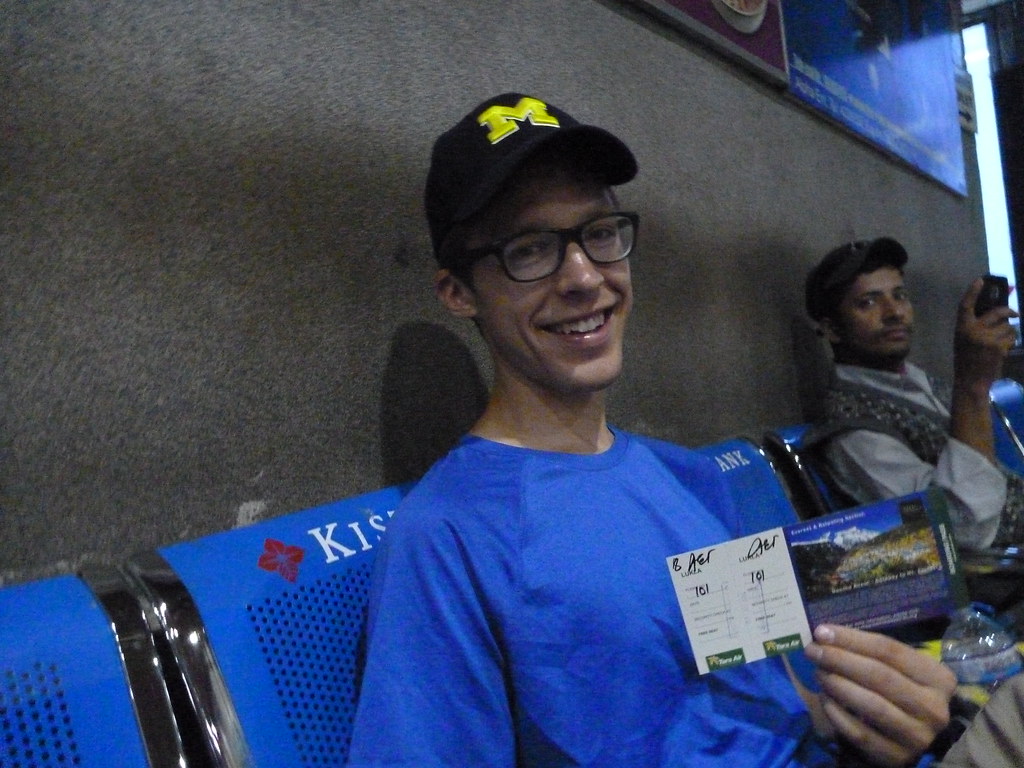 However, an unexpected, twisted stroke of luck happened to strike in the form of a rescue. Someone up high on the EBC trek was sick and needed a rescue chopper. The chopper was about to head to Lukla with empty seats when our guide, nicknamed DB, talked our way into one of those empty seats for the same cost as our airplane ticket! We switched our Tara Air passes for a Simrik Air chopper ticket and could hardly believe our luck.

Helicopters sometimes fly in marginal weather because their visibility minimums are much lower than for fixed wing aircraft. Six of us (four westerners, two guides) boarded and we were off! 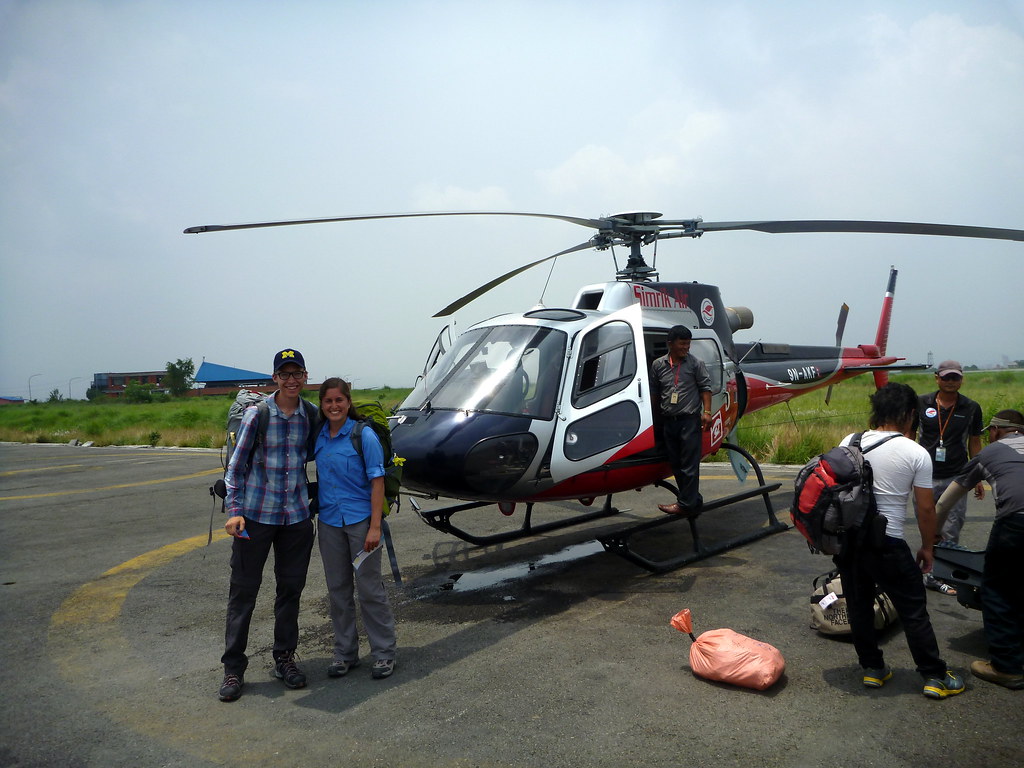 Lukla has earned its reputation as a risky landing for a reason. Its runway is tilted upward at a 12 degree angle. A cliff guards the far end of the runway, preventing any notion of a “go around” in the event of a missed approach. It goes without saying that there are no landing aids. 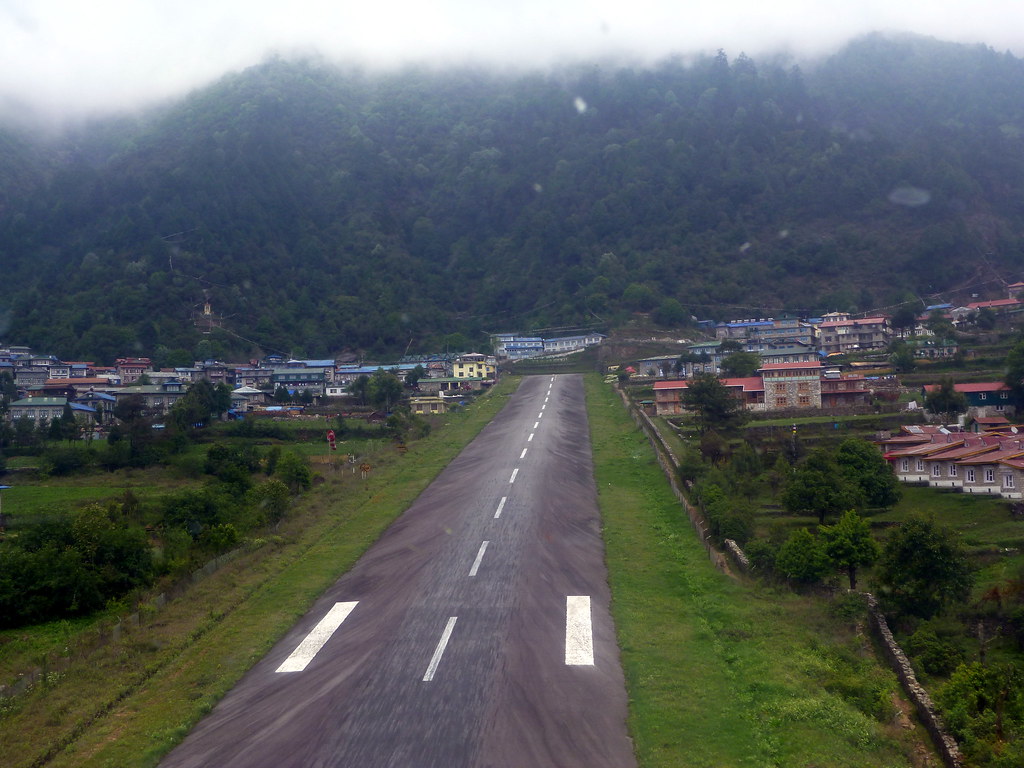 We were happy to be making the landing on the helipad rather than the exciting way. After we carefully unloaded (ducking to avoid the risk of the rotor blades) we watched the chopper fly away.

We ate lunch in at the Mera Inn in Lukla but didn’t stay long, starting out down the stone-paved trail for Phakding. 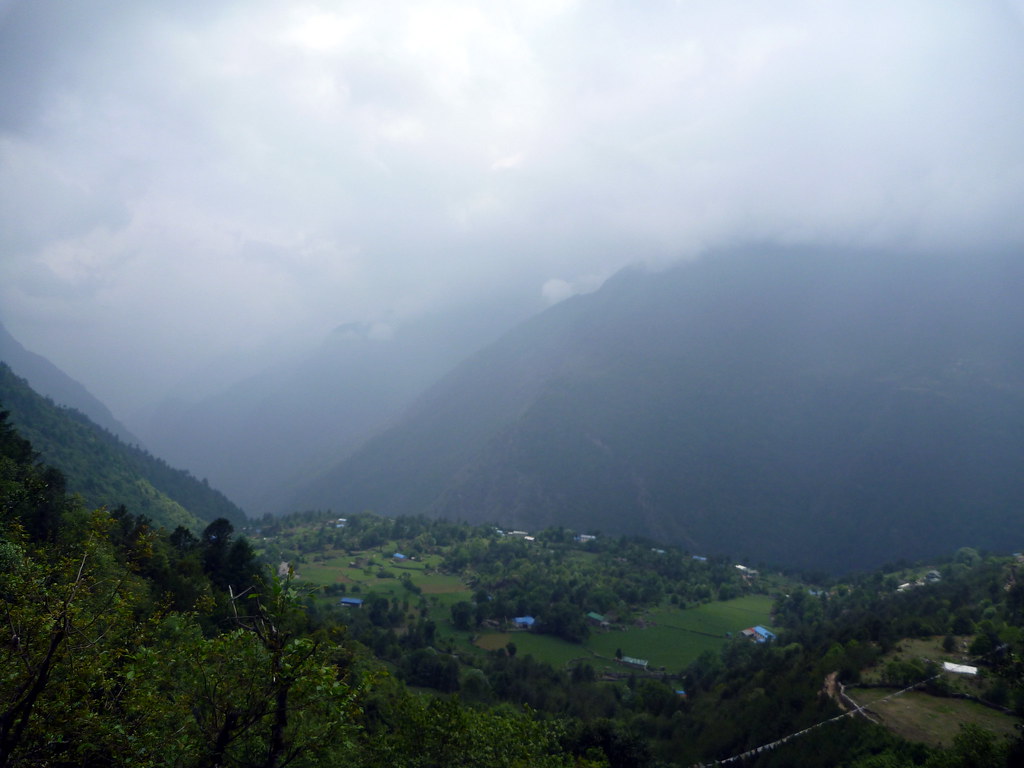 The way is mostly downhill, descending about 200m through a few minor villages. The cloudy day lent a gloomy air to the deep valley as we covered the deceptively easy first few miles. Near the bottom of the valley, we crossed our first steel suspension bridge – a remarkable bit of engineering considering the remoteness of the region. 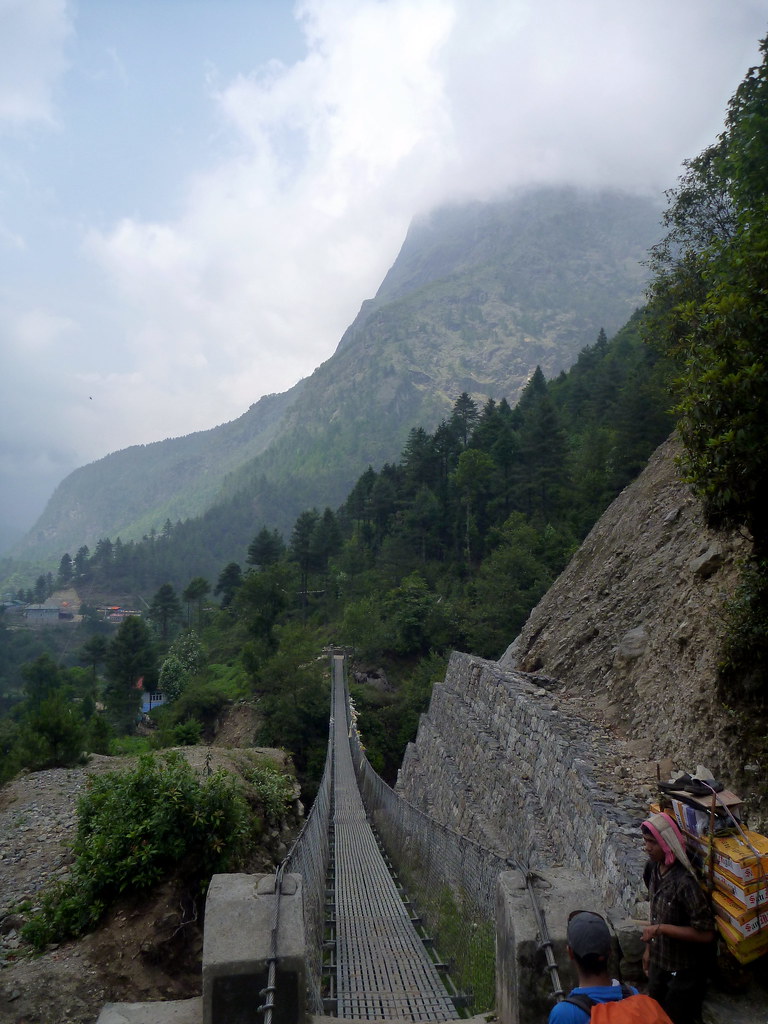 And like that, after just a few hours of easy walking, we reached our home for the night in Phakding – the “Hotel Beer Garden” which appeared to be the only one open at this time in the off season. The teahouse had running water, a bit of power for lightbulbs, but no WiFi. Usually they have internet but some technical problem was affecting the village.

Day 2: Phakding to Namche Bazar (3440m)
Today we woke up to (slightly) clearer sky; a common pattern in this pre-monsoon season.

After a hearty breakfast we started the long uphill climb to Namche Bazar with a rolling meander back and forth across the Dudh Kosi river. The river runs a milky white color from “glacial flour” – the ground up rock dust from the substrate under the glaciers above. 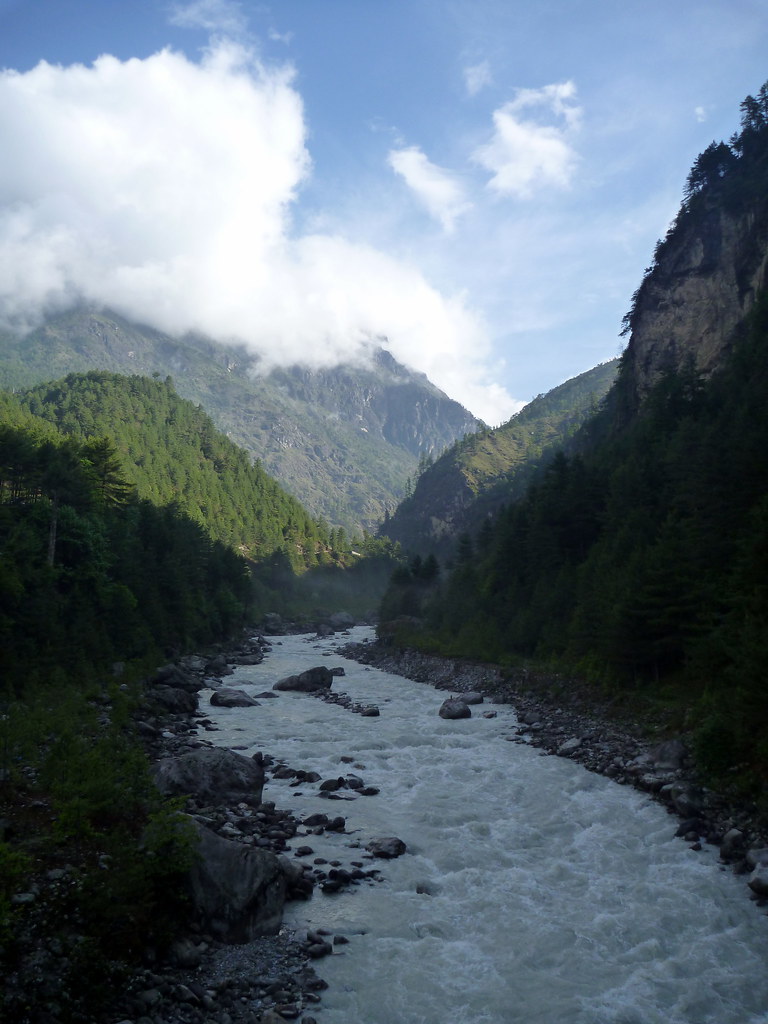 Along the way I was astonished at the strength of the porters, local men who carry loads from the airstrip at Lukla to the roadless villages above. They are paid 50¢/kg for the two-day journey to Namche! Some carry up to 90kg at a time strapped to their back and forehead.

The trail between Phakding and Jorsalle (the entry point to Sagarmatha National Park) passes through a few small villages including Monjo, where we stopped to get our permits checked for the park. We stopped for a very early lunch in Jorsalle before climbing out of the valley. 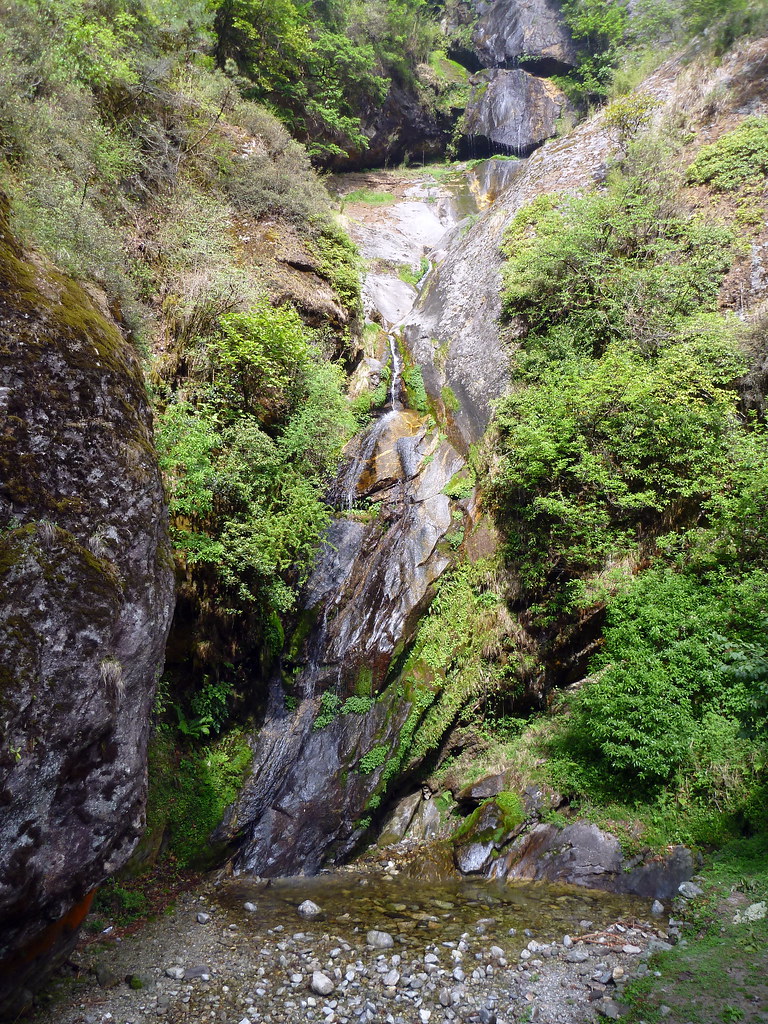 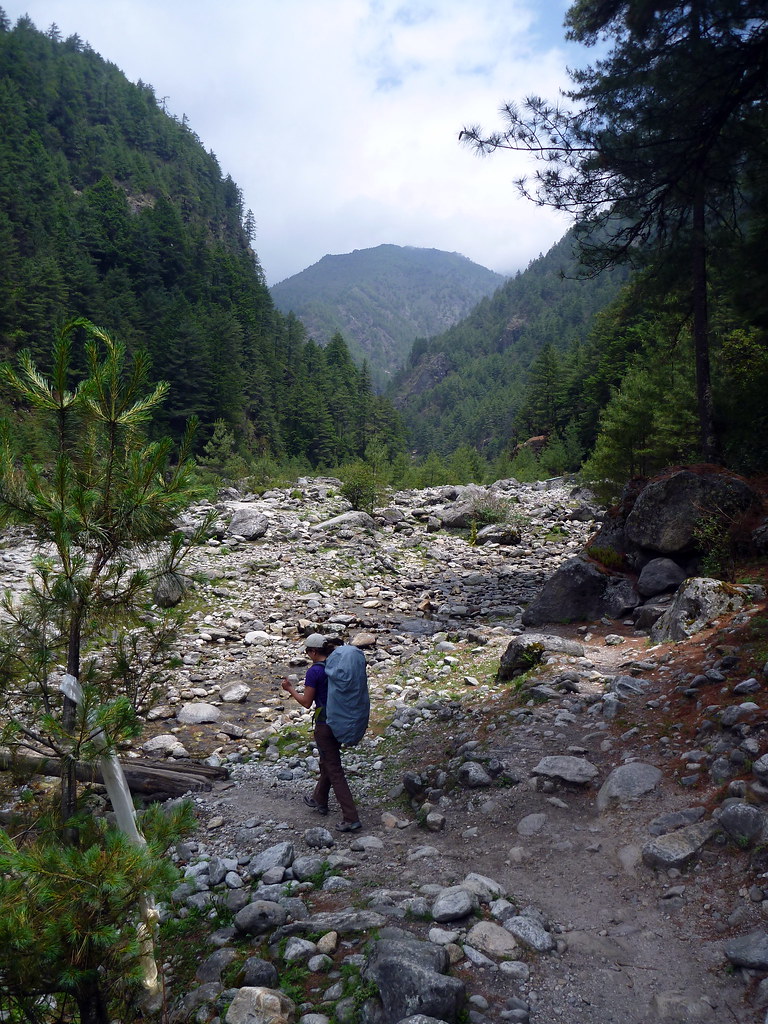 Each long suspension bridge saves us around 100 feet of extra elevation gain and loss by avoiding the descent to the river. The last one before Namche is particularly high. 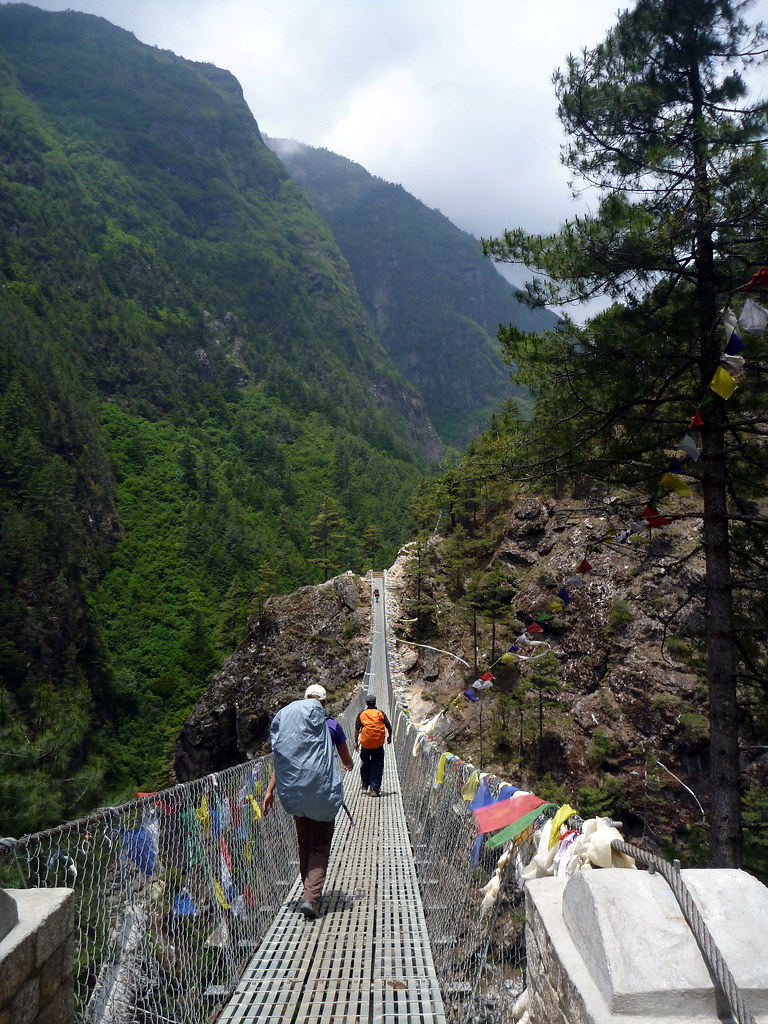 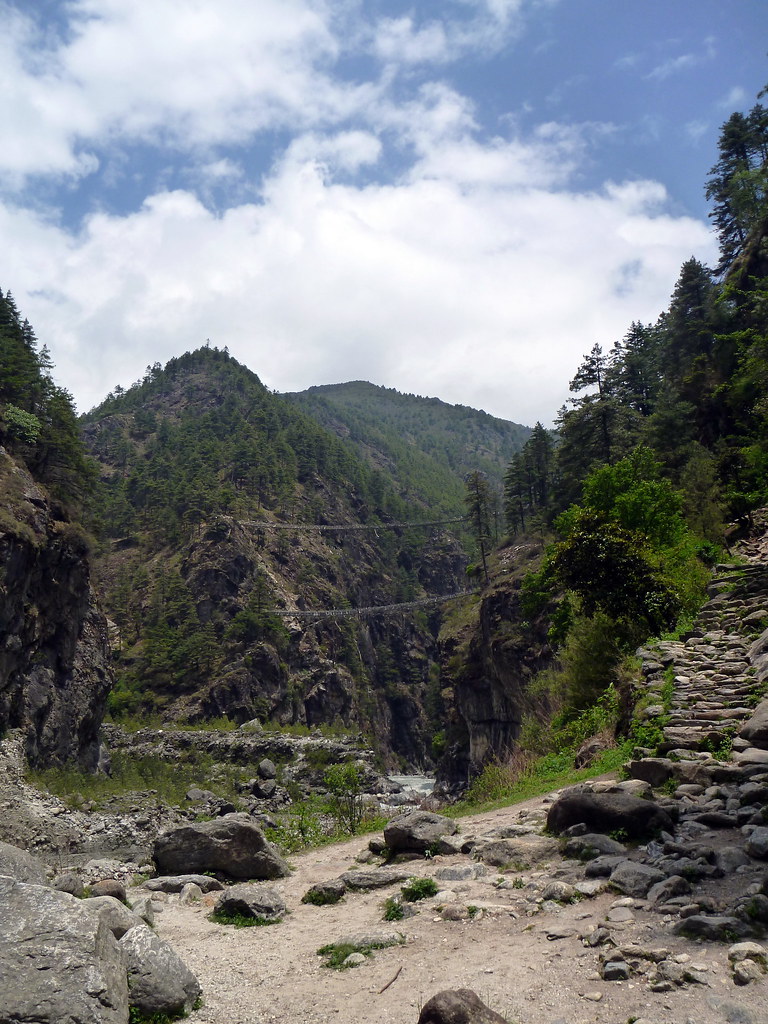 The climb from Jorsalle to Namche is the biggest single one of the trip, gaining almost 600m on stone stairs and dirt trail from bottom to top. It was a bit hot, and we weren’t quite adjusted to the altitude yet, so it was a tough hour and a half. 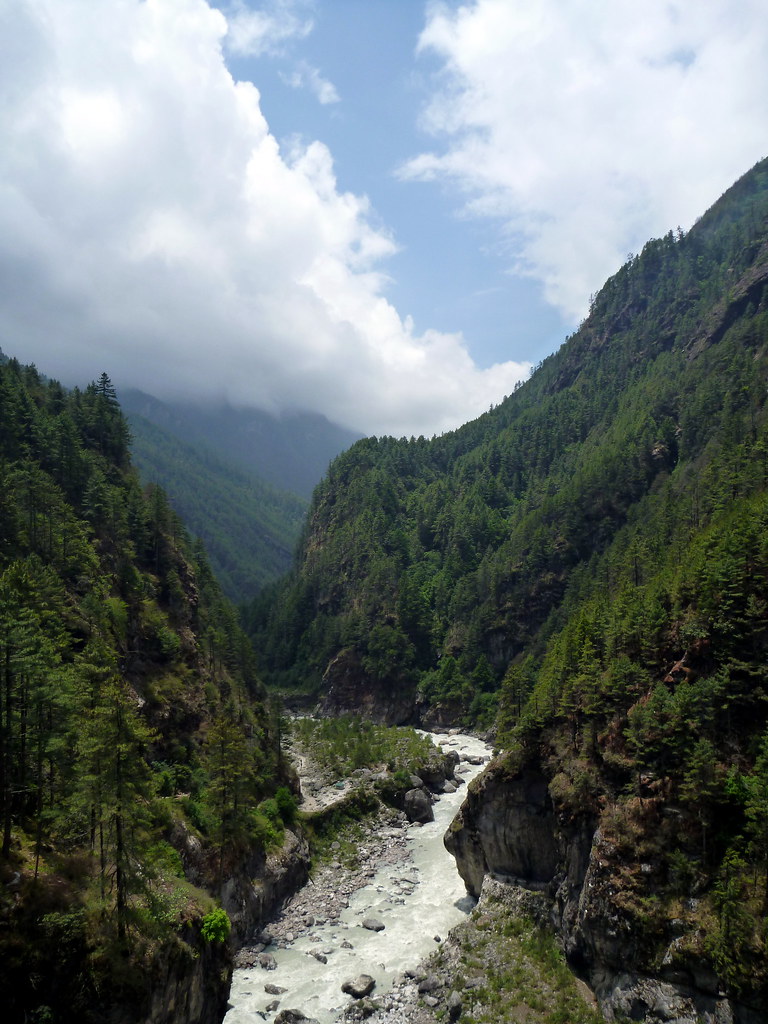 Before we knew it, the beautiful Sherpa capital of Namche Bazar came into view. 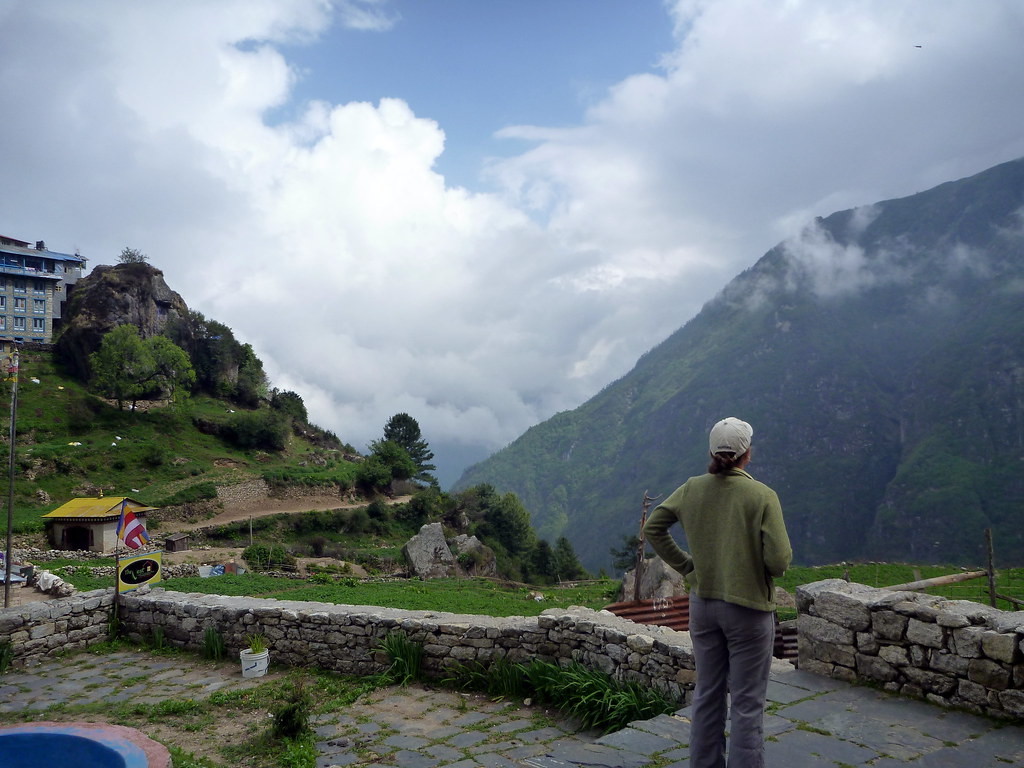 We dropped packs at our lodge, the Nest at Namche, and took a little walk around the town. It is beautifully colorful in the mist! 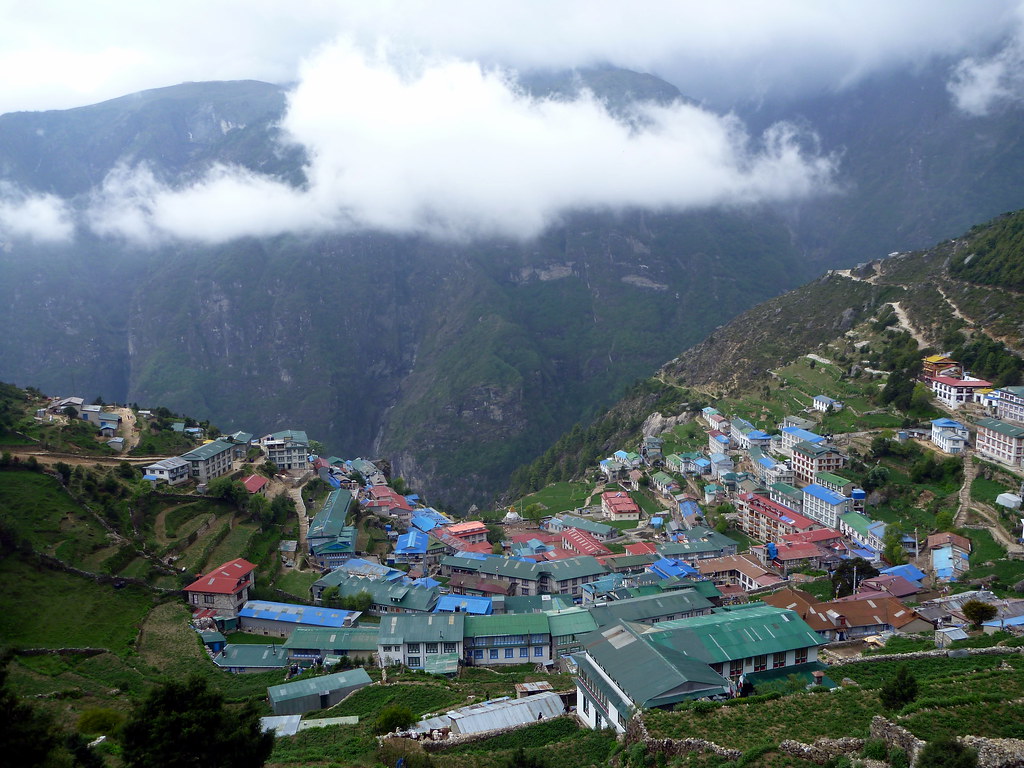 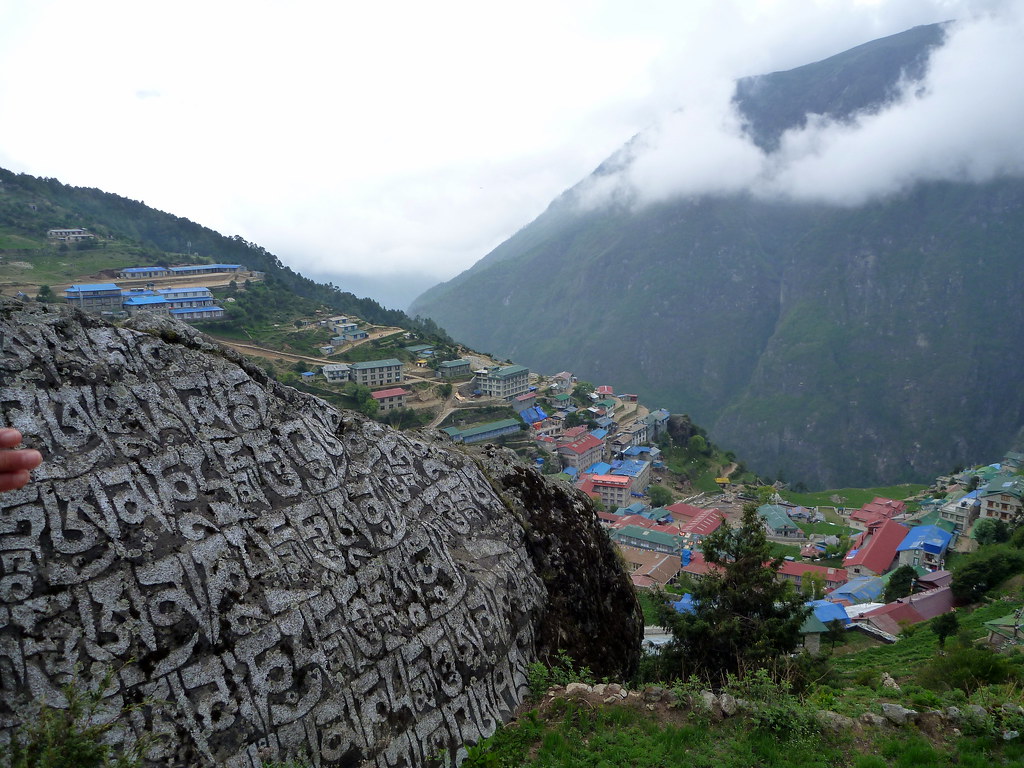 We finally got an “I’m OK” message sent to our families using the fast WiFi at the Nest. Unfortunately, the internet gets cut off around 6pm each evening.

Sidebar: Trek Accommodations
Accommodation in the lodges, or “tea houses,” is basic but more than adequate for a comfortable trek. There is usually a main hall, with tables and cushioned bench seats surrounding the perimeter. A dung-burning stove heats the centre of the room as required. Away from the main room are the guest rooms, consisting of two twin beds and a padlocked door. Blankets are provided if there are enough to go around, and we relied on this in the slow off season to avoid carrying sleeping bags with no problems. Bathrooms and (generally) a sink are shared down the hall.

If lucky, the lodge will have a functioning lightbulb in each room and a Western (sit) toilet that flushes by itself. At worst, there may be no power, a squat toilet that flushes by pouring water down it manually, and no sink for washing clothes. This latter case happens more frequently the higher one travels as resources become scarcer. It goes without saying that the water is not safe to drink without treatment. We used UV sterilization (the SteriPen was a great tool).

Day 3: Rest Day in Namche Bazar
We enjoyed nice clear skies this morning for a brief hour or so after breakfast. 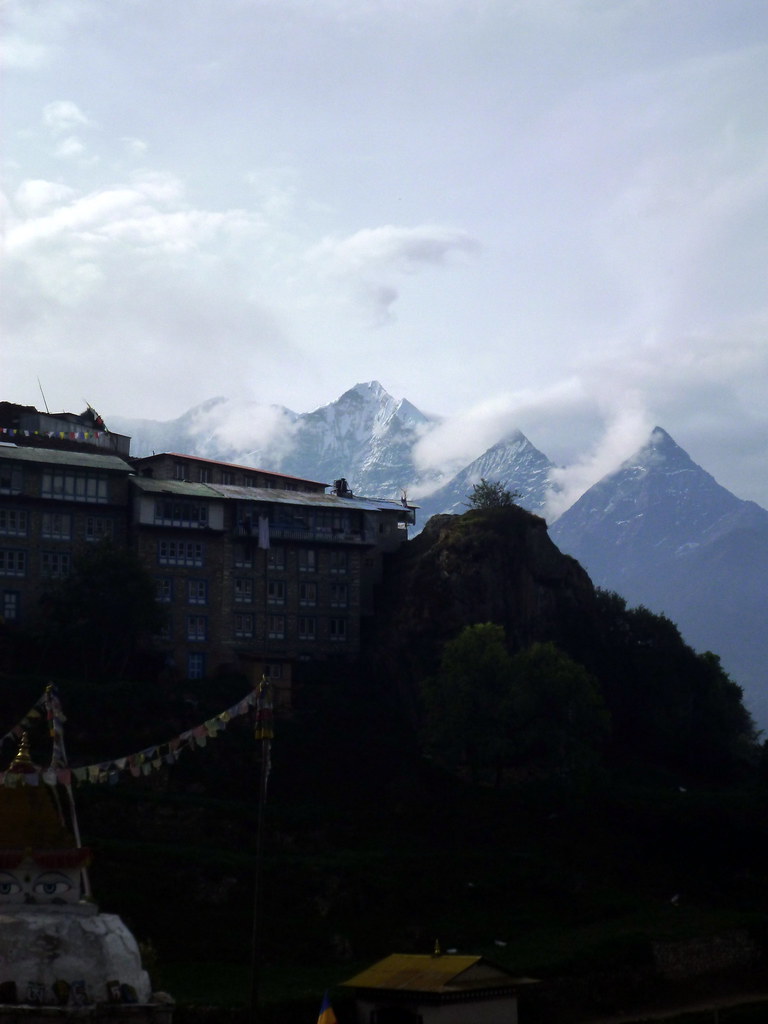 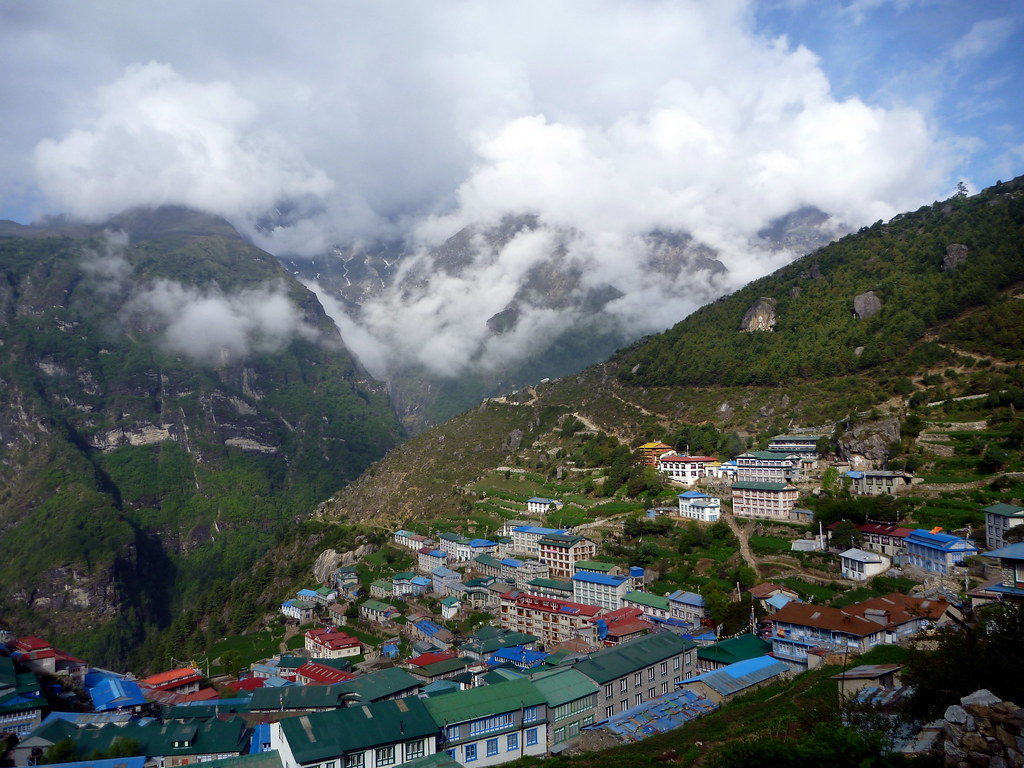 Today was pretty laid back: we took a side hike to the Everest View Hotel, a $200+ per night luxury lodge located about an hour’s hike above Namche. 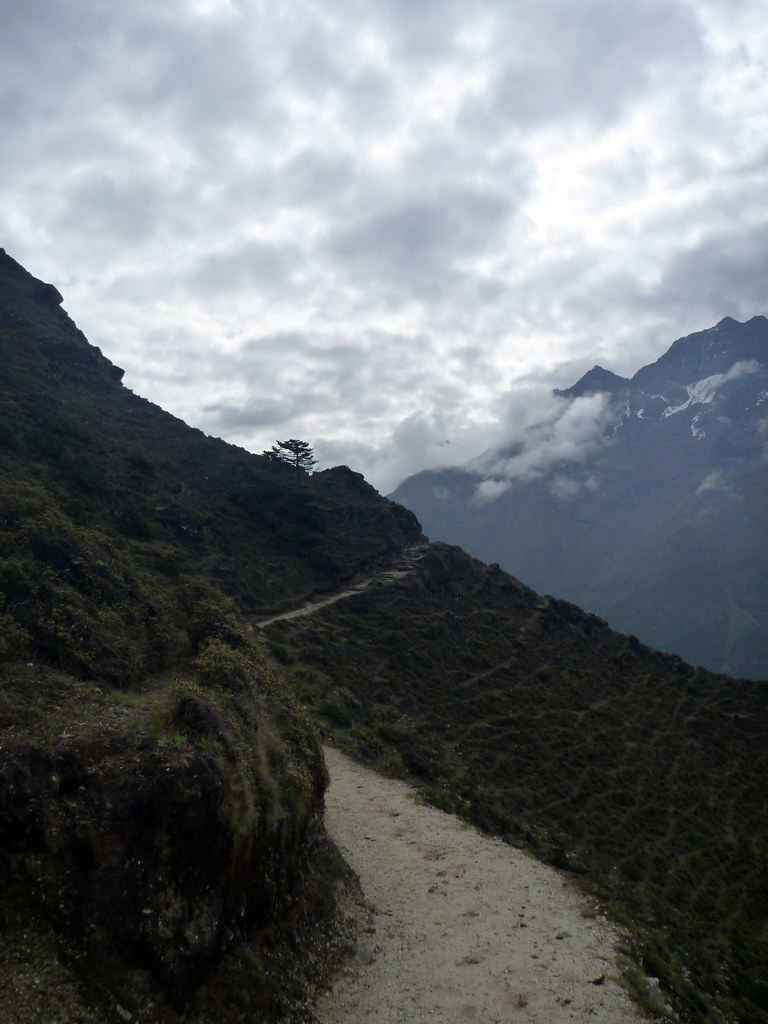 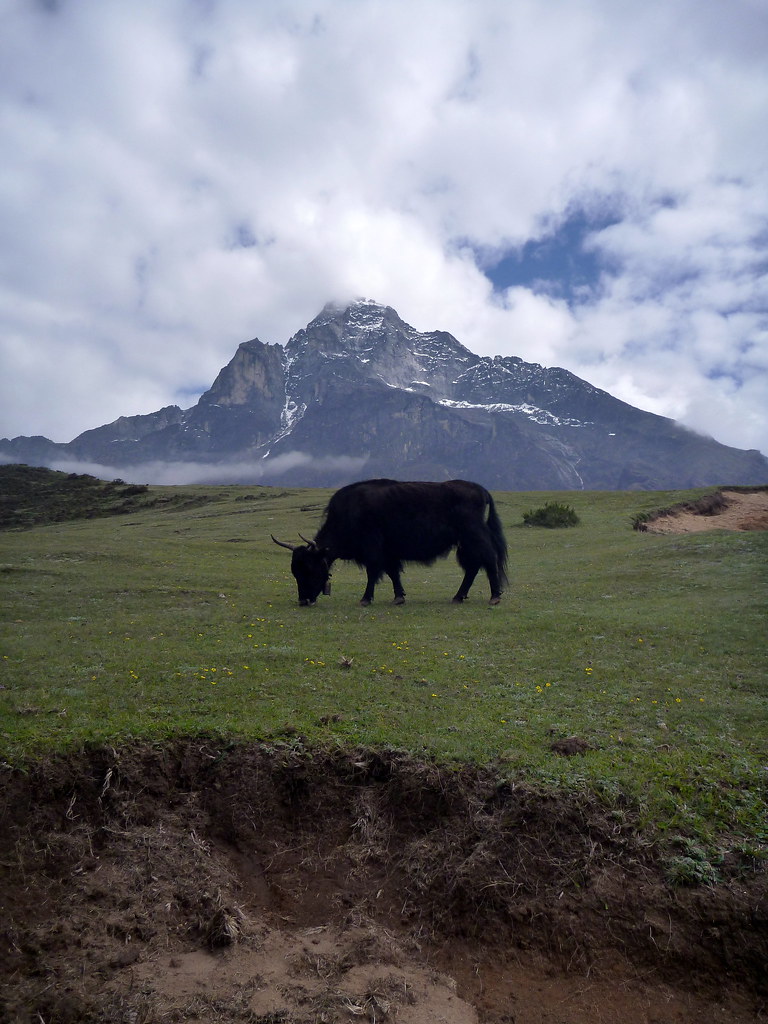 We enjoyed a pot of overpriced tea on the deck of the hotel. The clouds came in so we didn’t get the “Everest view” but we did catch a few looks at other peaks, including 8000+m Lhotse! 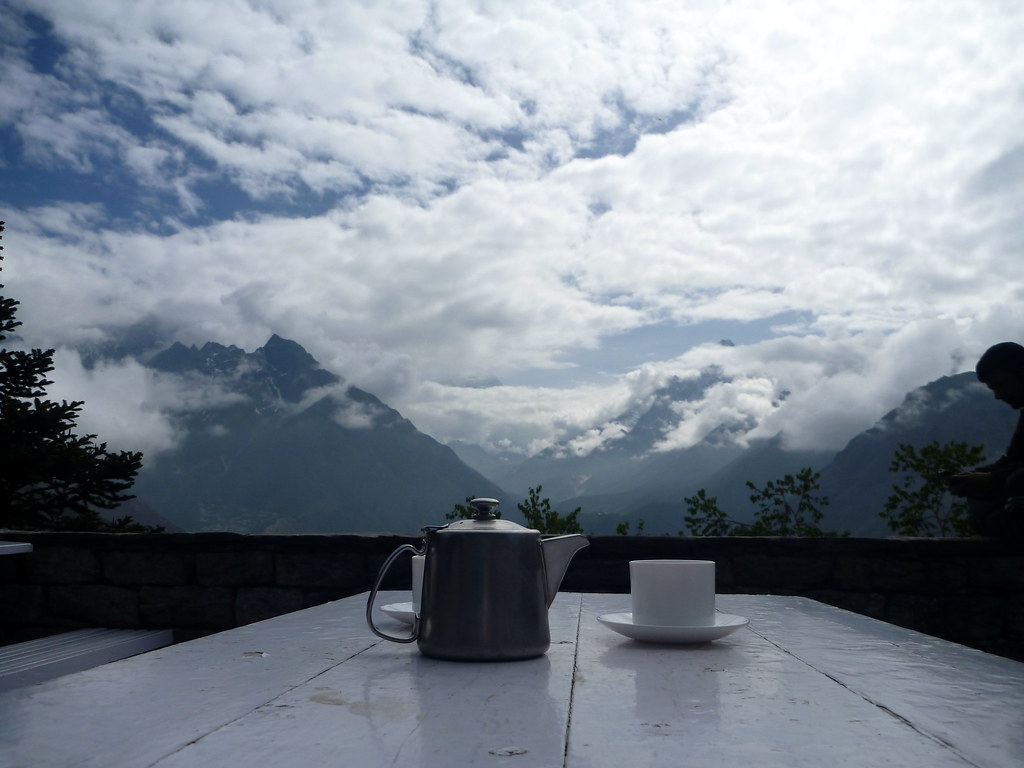 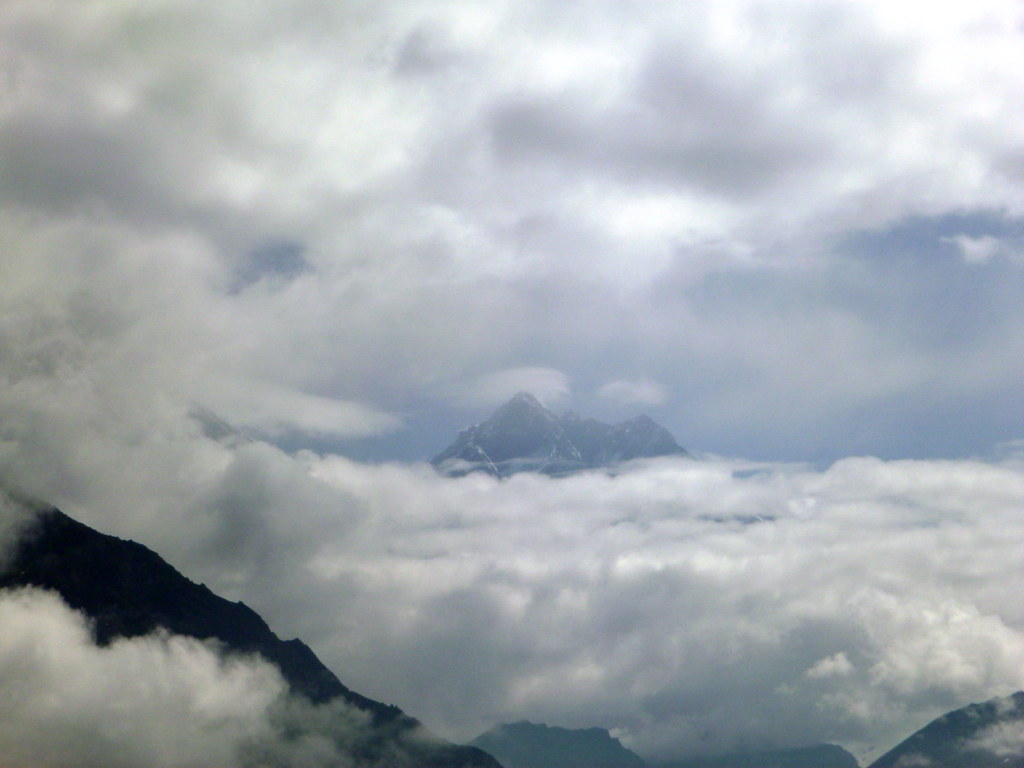 Next up was a quick visit to the village of Khumjung, where the Sir Edmund Hillary school is located. 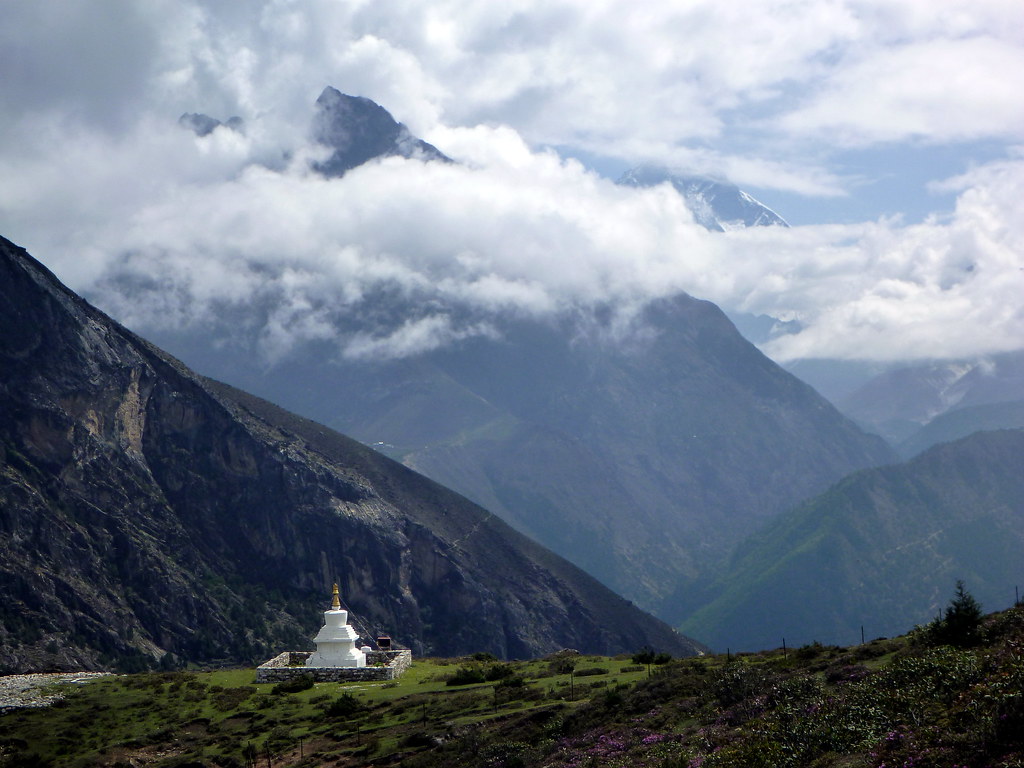 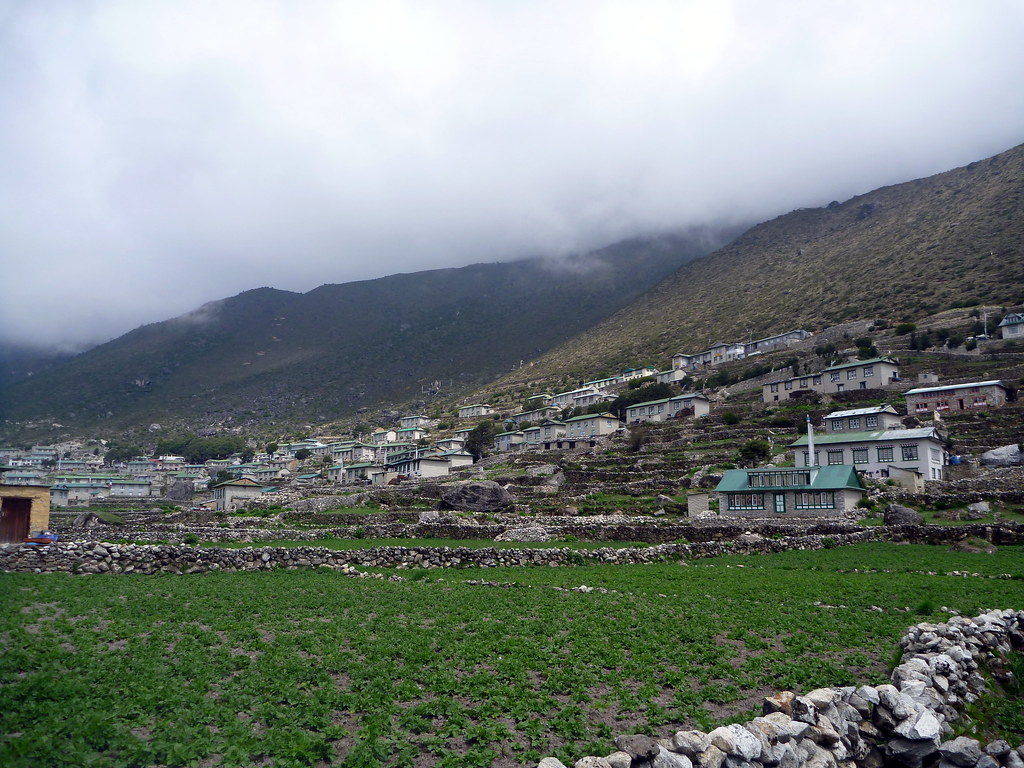 On the way back we caught a great view of Namche! 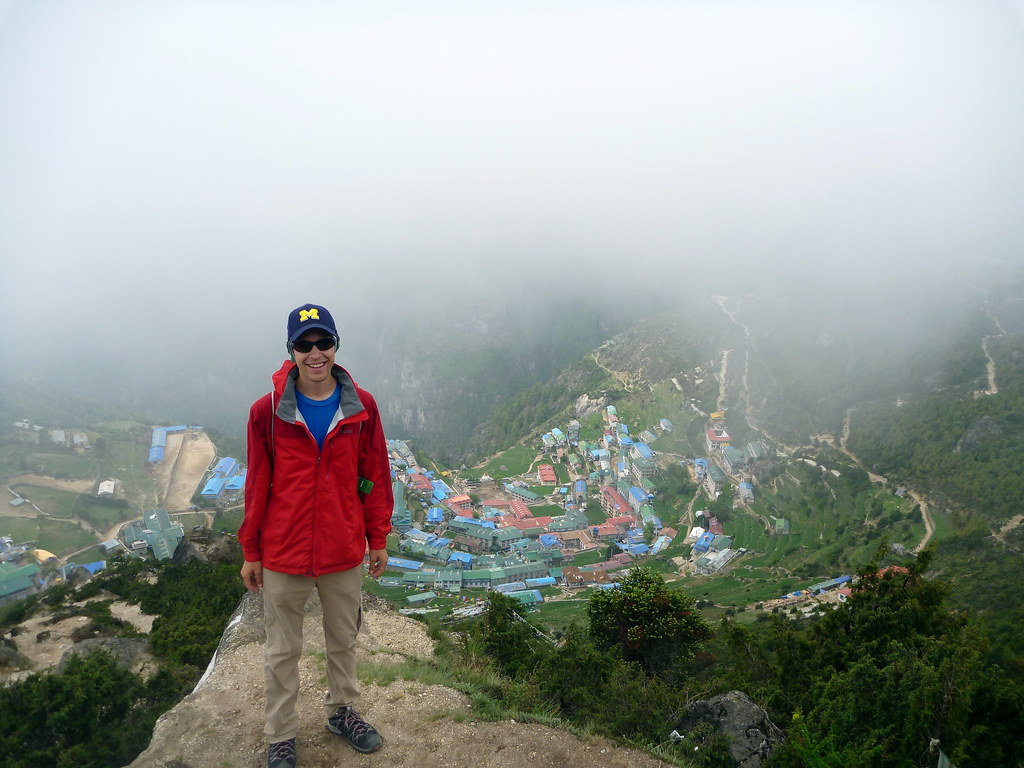 That night we rested up and made friends with some of the few other travellers in town. An advantage of the off season is that it made it easy to get to know the same faces in each village.

Also worth mentioning is that we paid for a hot shower tonight – piping hot and well worth the cost since we have no idea when the next opportunity might be.