Note: This is the first entry in a multi-part account of my June 2014 trek to Everest Base Camp. Navigate the full set here

Update: Several of the landmarks described here, notably including Patan Durbar Square, were severely damaged or destroyed in the April 2015 earthquake tragedy. Please consult updated travel references – hopefully the pictures here pay some form of tribute to the beautiful history that was lost that day.

Bustling, smelly Kathmandu: capital of Nepal, hub for Himalayan trekking, and my first taste of Asia.

The purpose of these first three days in Kathmandu is to make arrangements for my upcoming Everest Base Camp trek and see the sights in town in whatever time is left over.

I flew into KTM from Berlin via Doha on Qatar Airlines (excellent service for a low-cost airline) in the morning and caught a free hotel pickup from the Hotel Nepalaya where I’ll be staying for a few days. 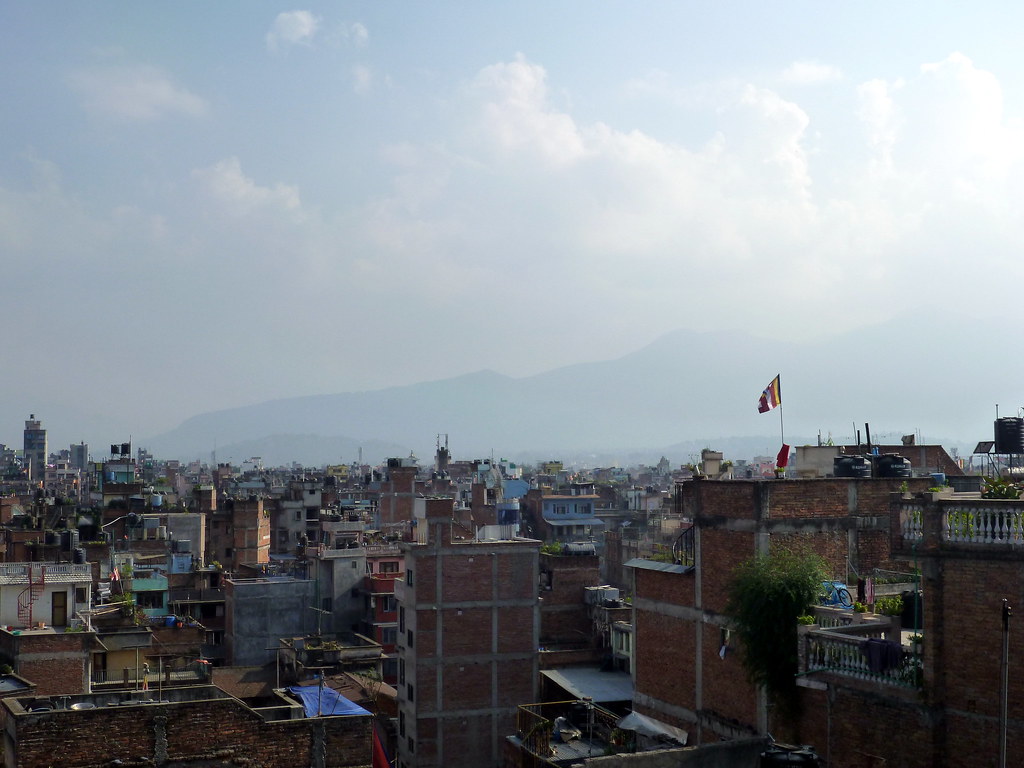 The air pollution in the Kathmandu valley is immediately apparent. While not as bad as certain places I visited in my only previous trip to a developing country (Guatemala), the air is visibly hazy and exhaust burns the lungs a little sometimes when on the road.

My hotel is based in Thamel, the main tourist neighborhood in Kathmandu. The streets are crowded with rickshaws, taxis, street vendors, touts, and stray dogs, each of which is constantly shouting for your attention. Sidewalks don’t really exist in this part of town so people sort of informally walk in traffic and get honked at if a car needs to go by. 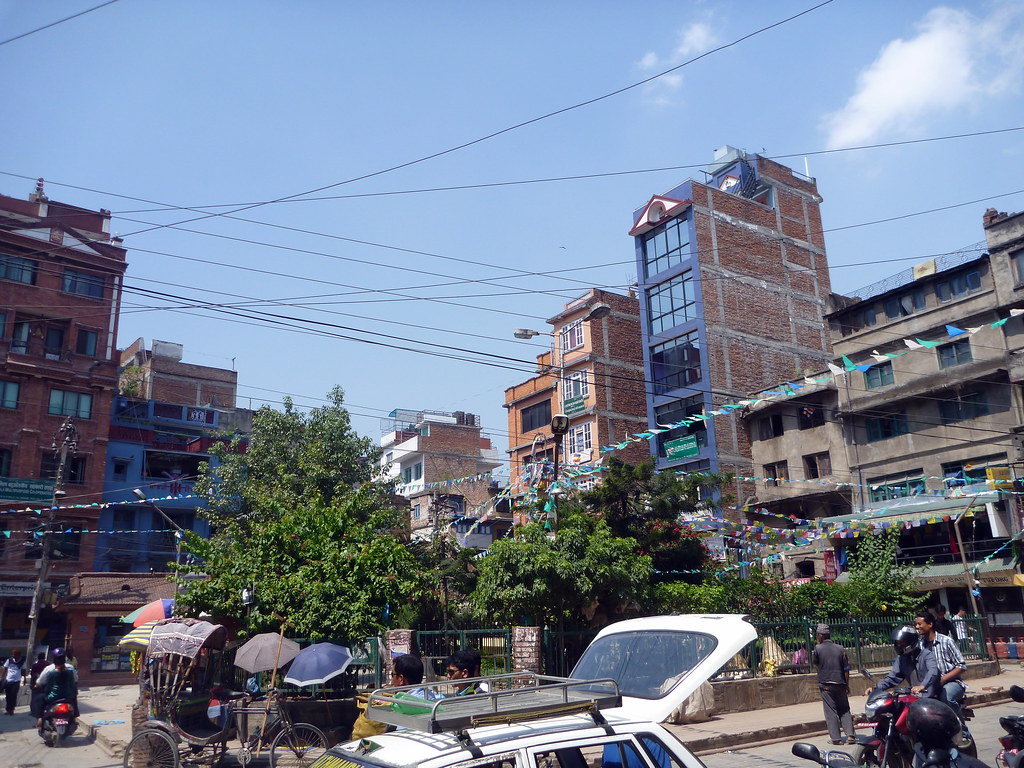 Another unique feature of Thamel is the variety of knockoff outdoor equipment available. They import cheap gear from China and embroider them with Western branding like Mountain Hardwear and especially The North Face. Some of it isn’t bad, and it is cheap! Avoid waterproof/breathable fabrics and down insulation which seemed to be the dodgiest of the counterfeit gear performance-wise.

Even in the off season, it seems like a lot of activity is going on. There are a few pretty little squares nearby but nothing too noteworthy. 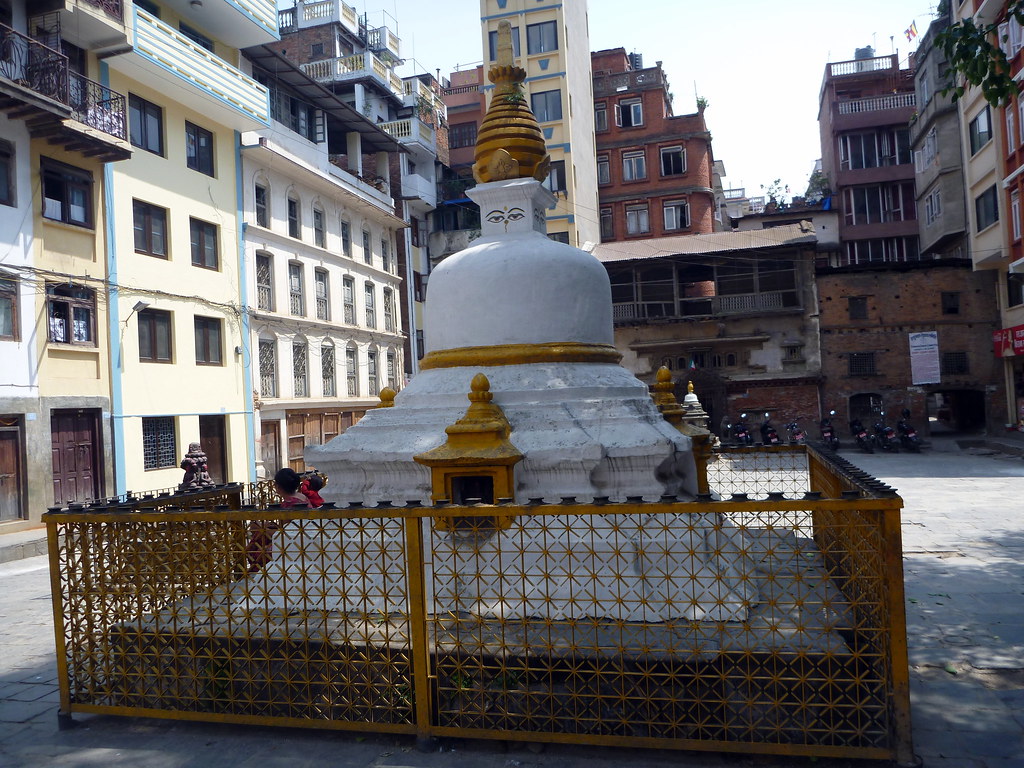 This is my first time in Asia, so it was a bit of a rough introduction. Thamel is pretty dirty and smelly as far as “touristy” places go. However, there are a fair number of hygenic restaurants if you know where to look. I relied on TripAdvisor and online reviews mostly and never got sick.

I walked through Thamel looking for a local trekking agency. They are not exactly hard to find. As a tall blonde dude, I was approached multiple times per block by touts for trekking operators, all of whom I turned away out of habit. One however, caught my attention through sheer persistence I suppose: “We’re just college students trying to grow our business!” As a recent grad myself, I gave him a second listen.

Ammonite Adventures is two guys, Krishna and Sovit, who run a variety of treks including EBC and ABC. They quoted me a really good price on a package including flights, permits, and a guide so I told them I’d consult with my friend (arriving the following day) and get back to them. I also had emailed another agency and set up an appointment for the next day. To make a long story short, we ended up going with Ammonite after checking out the other operator. We were impressed with our prospective guide, their level of attention, and the very fair price. We formally agreed to trek with them, flying out the day after tomorrow.

Day -1
Next, we really wanted to get out of Thamel so we walked from there to the so-called “Monkey Temple,” Swyambunath. This was a bit of a trek in itself through some decidedly non-touristy parts of town. 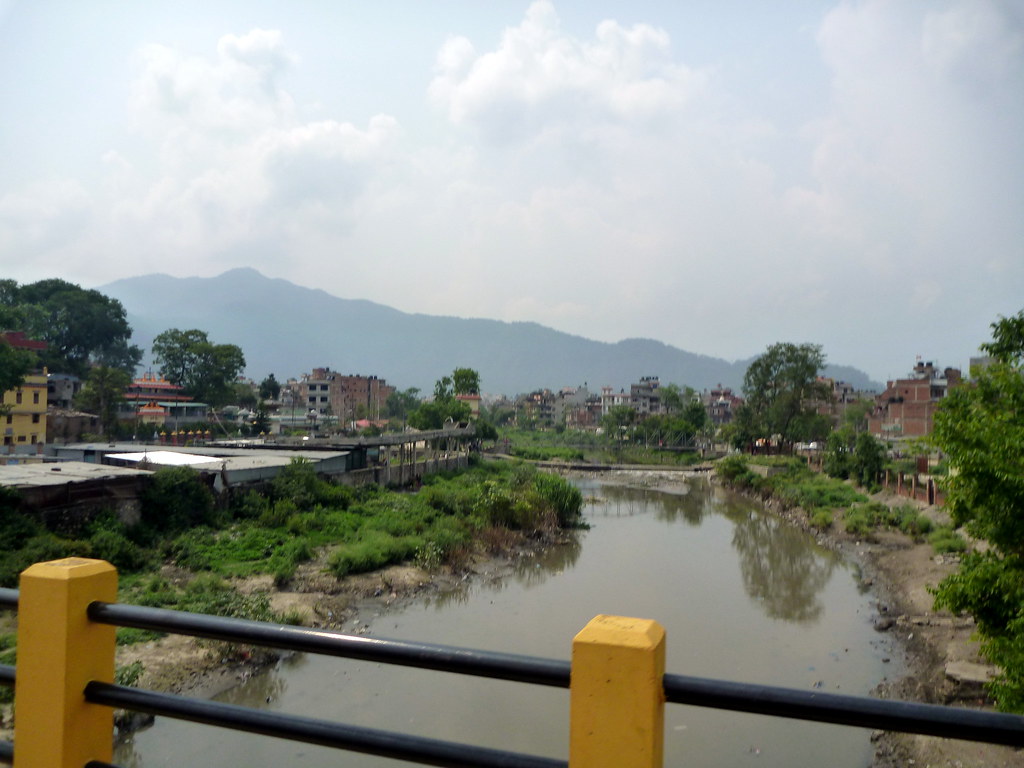 To get to the temple, one climbs several hundred, steep steps up a hill, eventually reaching a massive stupa (large mound-like stone and concrete structure housing relics of the Buddha). There is a great view of the valley, in a smoggy blanket below.

We saw many of these over the following weeks but this was among the nicest. The mysterious eyes are a distinctive feature of all Nepali stupas.

There is not much signage or interpretation up here, so it would be worth having a guide book or a page pulled up on your phone before you come. Actually, that’s true of all historic and religious sites in Nepal for the most part.

A famous tradition in Tibetan Buddhism is the prayer wheel. Inscribed with a prayer or mantra, the wheels are spun in sequence for good fortune or power. 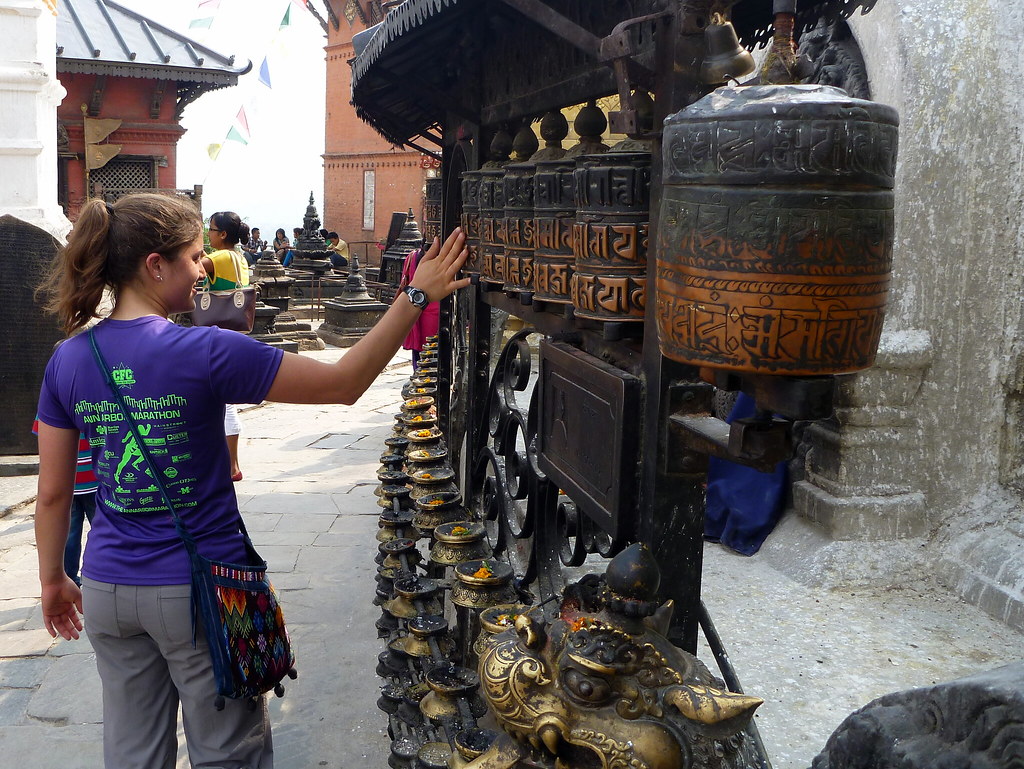 There is some fine old stone artwork around the temple as well. 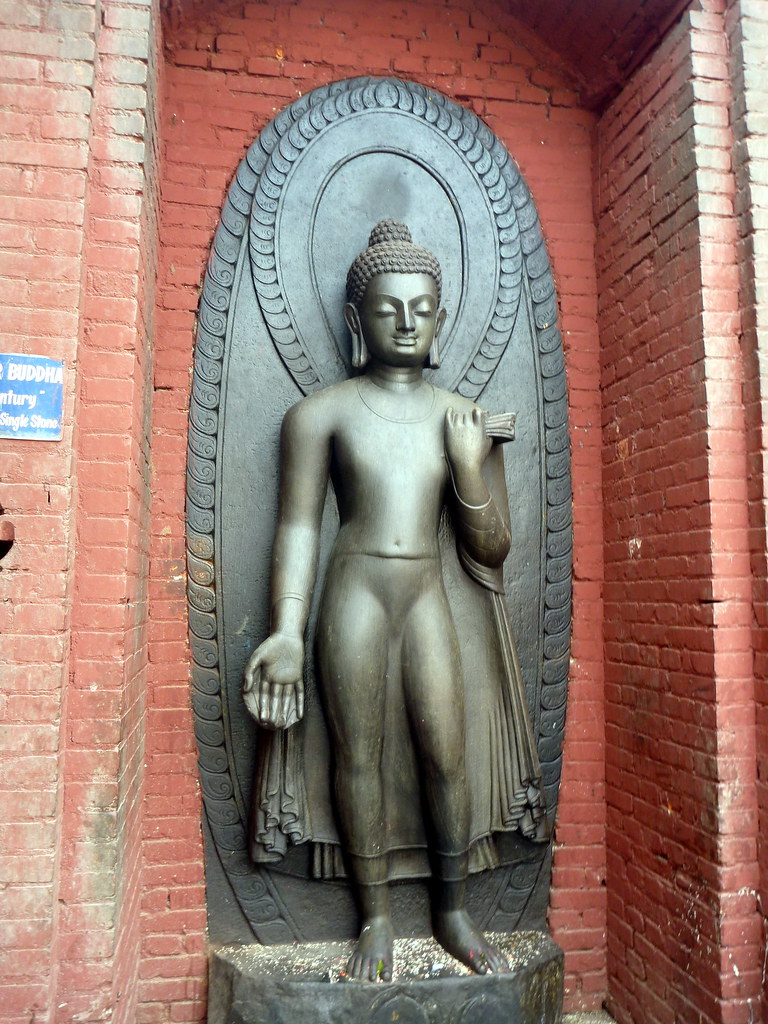 On the way back down, we ran into some of the monkeys that the temple is so well known for. Several monkey mothers were carrying babies on their bellies. 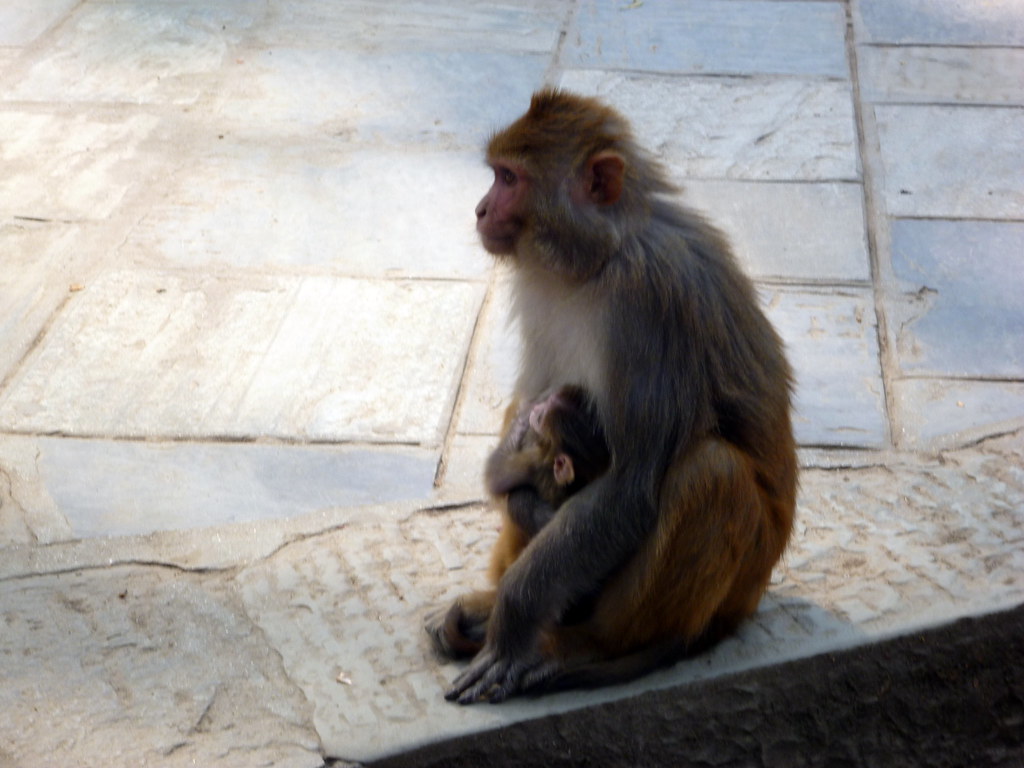 That evening, we enjoyed what we thought was our final meal before hitting the trail to begin our trek: a most delicious pizza and brownie sundae at Fire and Ice Pizzeria.

Lukla has a reputation for being the “most dangerous airport in the world so neither of us could sleep much the night before. Or maybe it was excitement for finally reaching the Himalayas?

Day 0
Today we left for the airport at 5:00am, and under cloudy skies we wondered if the flight would go. We were booked for the 6:15 flight on Tara Air.

The Kathmandu domestic terminal is like nothing I have ever seen. Security is a single X-ray machine and a frisking. The one western (non-squat) toilet was bubbling something in the air. It is a primitive terminal to say the least but it gets the job done for thousands of tourists each season in addition to the even more numerous domestic flights by locals. 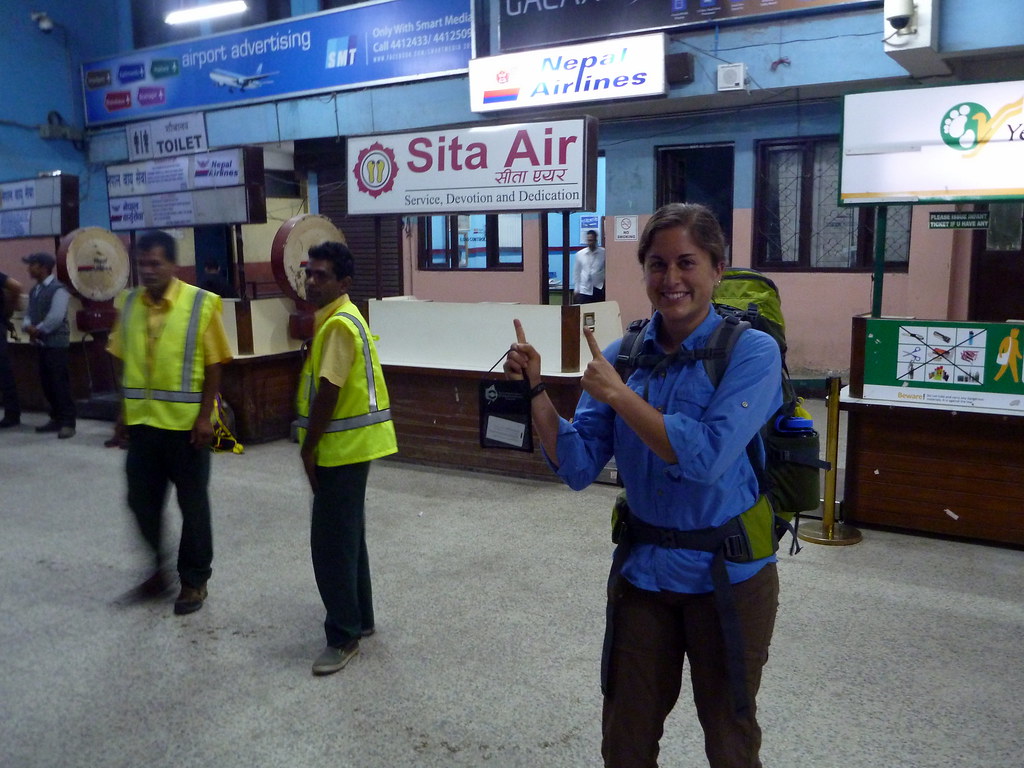 Unfortunately, weather was cloudy in the mountains so our flight got delayed and delayed and finally cancelled. It sounded like the flight had not gone for several days; not a hopeful sign.

To make the best of the lost day, we formed an alternate itinerary to Annapurna Base Camp starting from the more reliable Pokhara airport if we couldn’t make it to Lukla tomorrow.

With much of the day free, we hired a car to reach the Boudhanath stupa, a Tibetan Buddhist square located farther from Thamel than we could walk. It is huge – big enough that there are stairs and walkways on it. 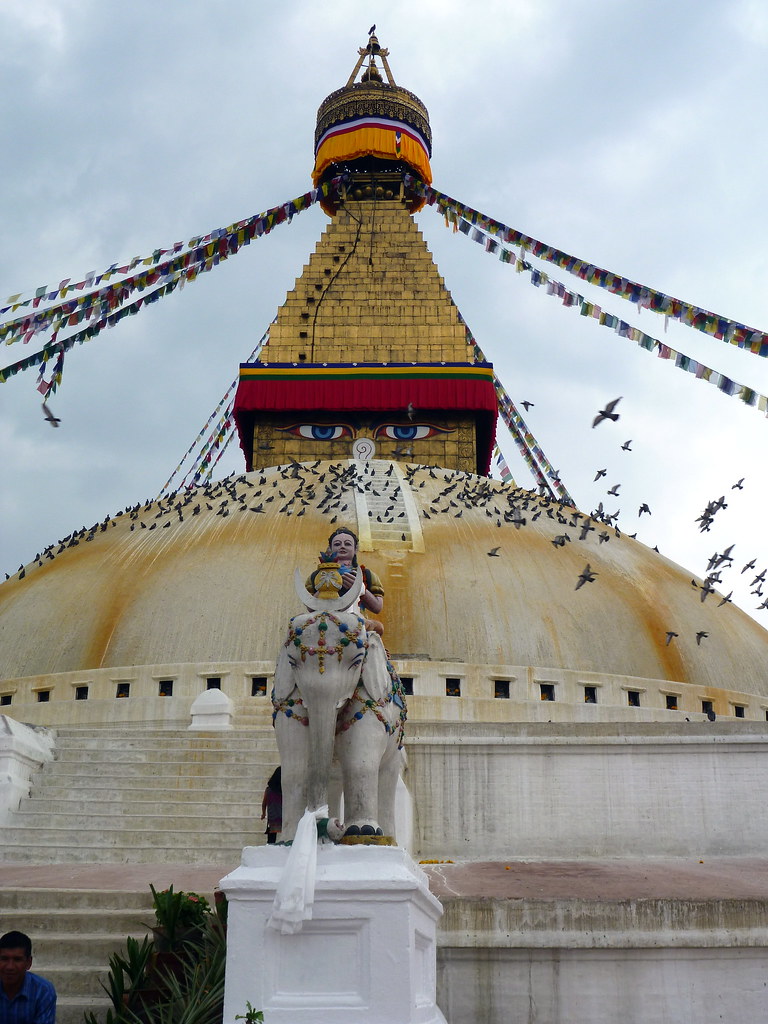 Several of the shops around the square sell magnificent Tibetan paintings and are worth a  visit to learn about how they are made. Another sold very high quality singing bowls – they give an interesting and hypnotic effect when balanced on the head and struck with a mallet. 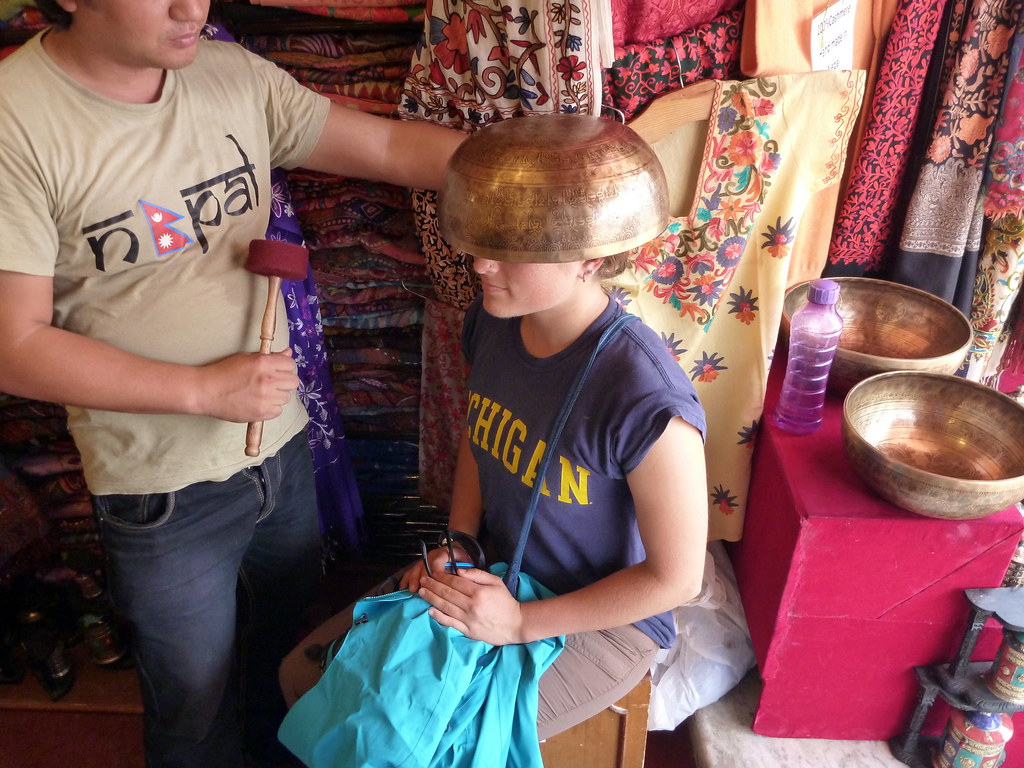 Next, the car took us to Patan Durbar Square, a major Hindu temple complex south of town. Again, the lack of signage made it difficult to tell exactly what was important but the wooden door archways and ancient stone work is worth a visit. 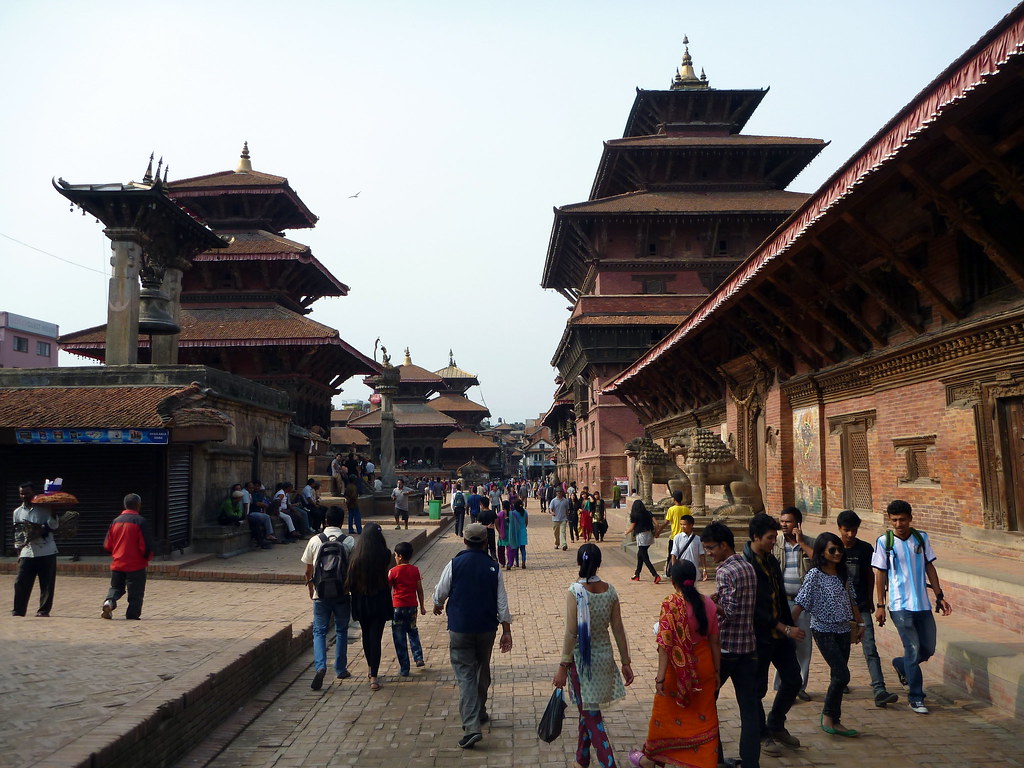 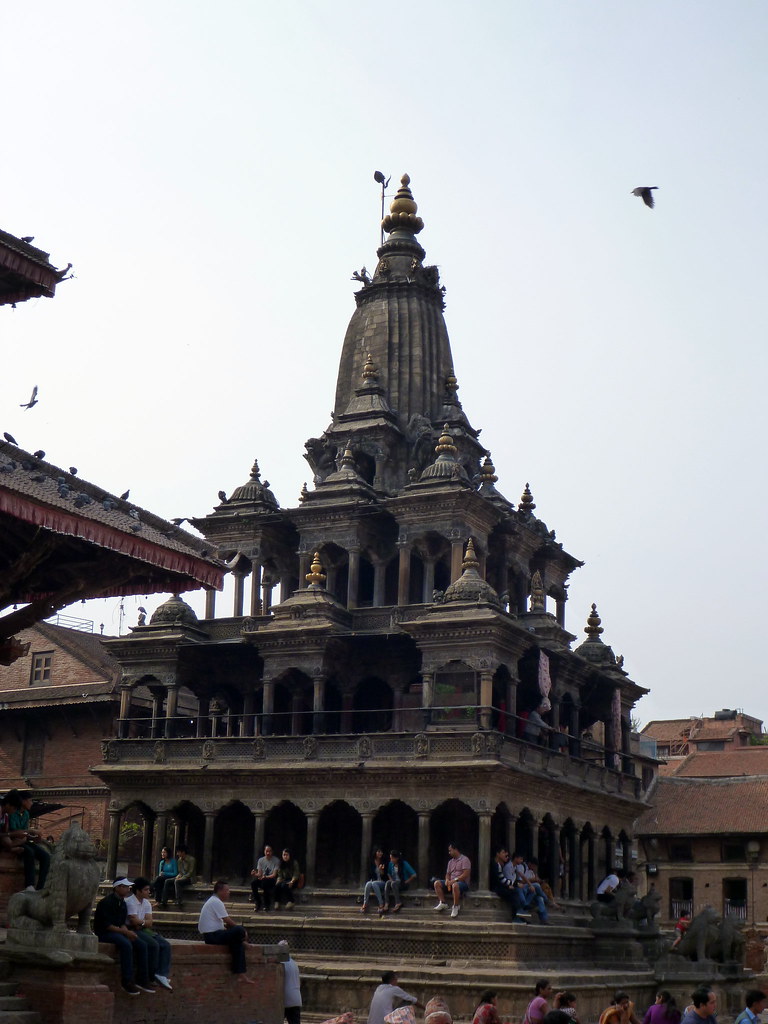 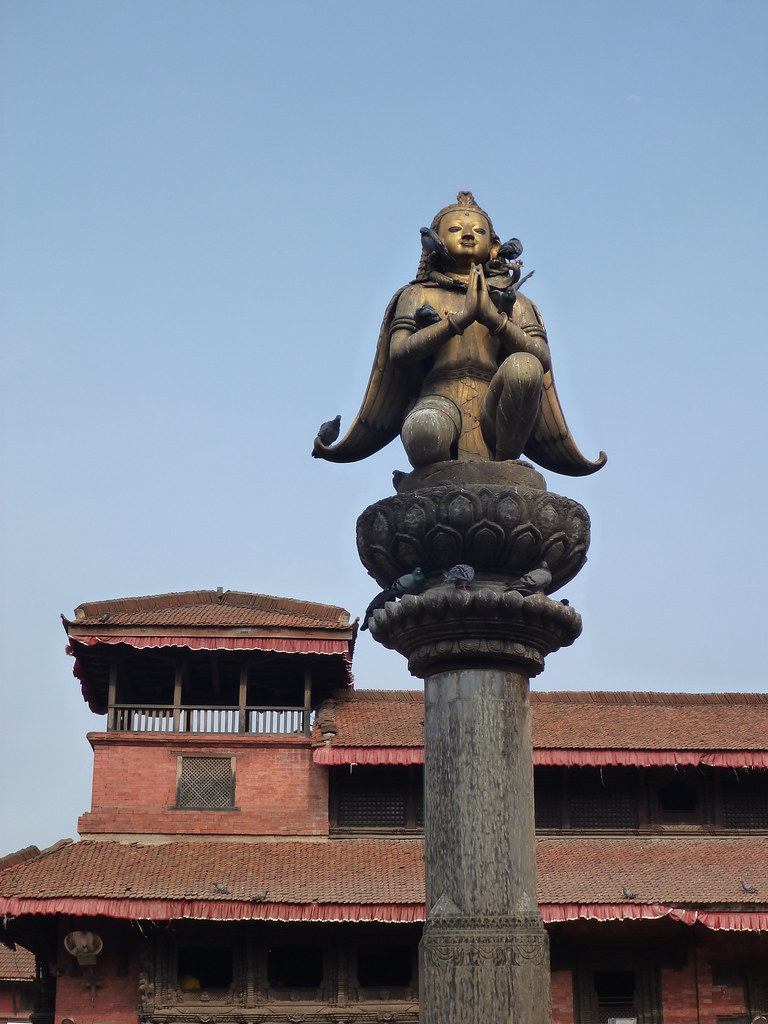 We had a second “last meal” before trying again at the airport tomorrow morning, with no idea whether we would end up in the Everest region, Annapurna, or back in Kathmandu by the end of the day.