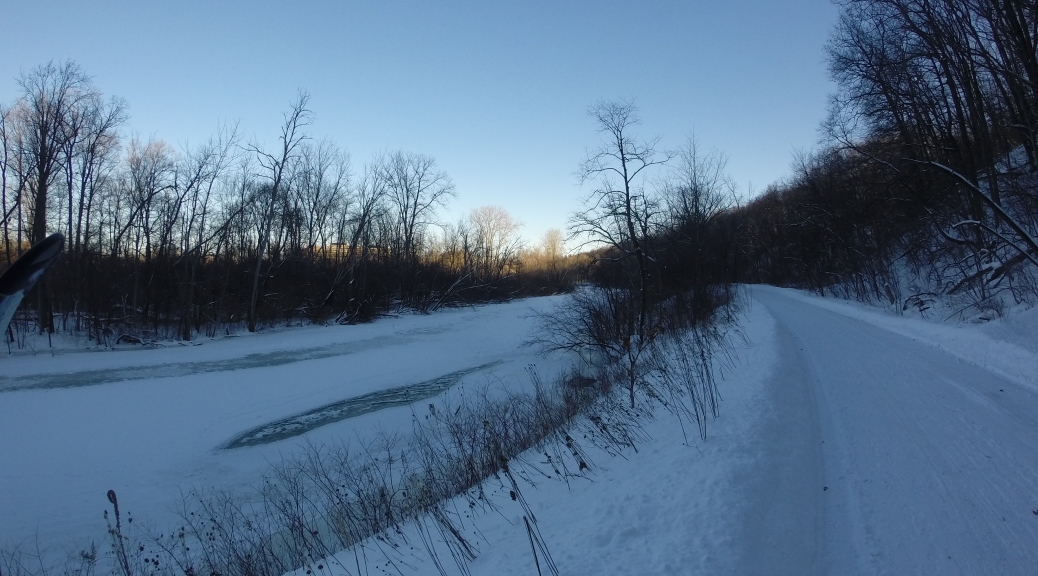 Tuesday was the first time class had been cancelled due to weather at the University of Michigan since 1978 as wind chills dropped to -30F. With nothing else to do, I grabbed my skis to check out a couple of areas of interest in the Arboretum, right near the UM Hospital. There are some fairly steep hills, and a couple places I thought I might be able to take advantage of this winter’s deep layer of powder. Unfortunately I was mistaken.

The area I thought would be nicely gladed out had been left with dozens of closely-spaced stumps sticking out of the snow about 6 inches, making it difficult to ski. I found some other lower-angle terrain which was more clear but not fast or long enough to be interesting. There are some tremendous steep bluffs down to the river, but those are all choked with brush and fallen logs. With Michigan’s snow pack being too thin to cover up the bushes, it’s no wonder that I don’t see many skiers in the park. I’m glad I gave it a shot though.

The Huron River is essentially frozen solid, which is impressive to me. What a great winter it has been!

This weekend I had the opportunity to check out the world of ice climbing in a somewhat controlled environment at the Peabody Ice Climbing club in Fenton, MI. I had never climbed ice before, but learning on top rope was not as intimidating as I would have thought. There’s a 30′ tower and a 70′ for the more adventurous, along with a mixed climbing area. I had such a good time and I’m stoked to try it again soon.