Simon and I climbed Lone Peak today via the Jacob’s Ladder route from Draper, UT. It was a cloudy and unsettled morning as we set out, raining for the first few minutes of the hike and then on-and-off during the day. We weren’t sure we would summit but we gave it a shot.

I’ll be honest, the Jacobs Ladder trail is not a “fun” hike. The trail is pretty darn ugly. The first part climbs slowly out of the trailhead with scrub oak and dry dirt surrounding.

After that, it only got worse. The trail climbs basically straight up in loose dirt and scrub with few views to speak of, gaining thousands of feet over a couple of miles. Eventually we broke out onto Draper Ridge, strolled through a pine forest, and things got nicer.

There was another boulder field and a bunch more elevation gain, and eventually we entered Lone Pine Cirque. The route here is completely off trail, marked by cairns.

The granite cliffs are spectacular – like something out of the Canadian Rockies. Amazing crack and chimney climbing can be found here. 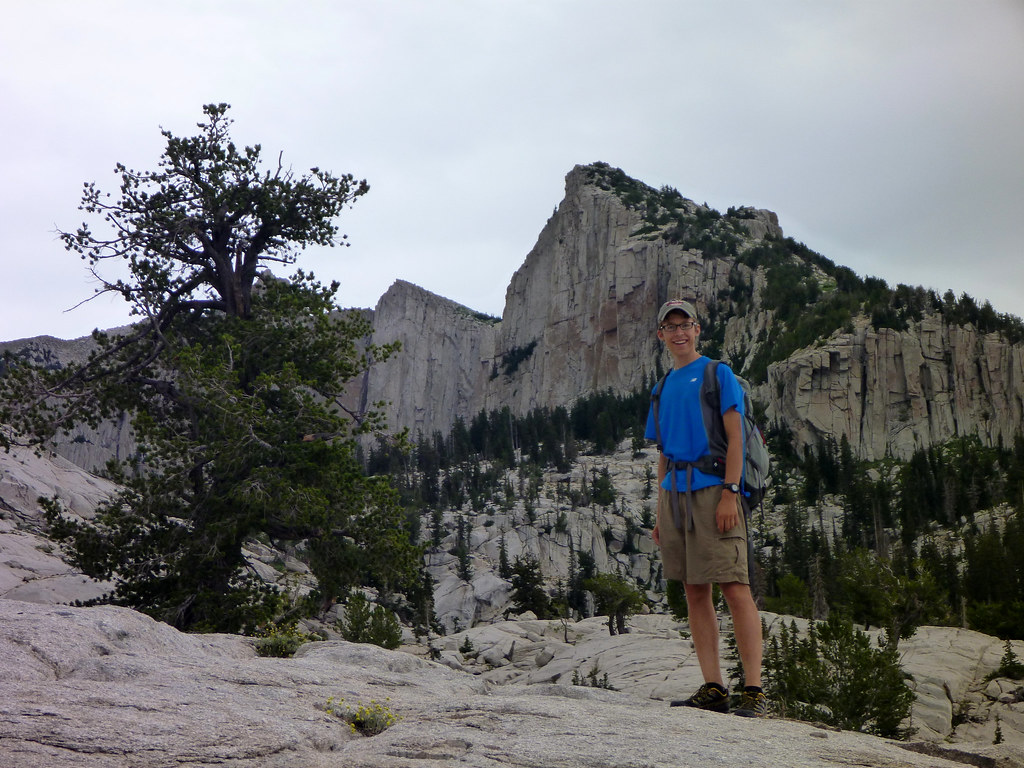 We crossed the granite bowl following the cairns and gained the ridge via a well-trod gully.

The ridge is not too steep or knife-edge until right next to the summit, so it was pretty much a boulder hop following the cairns and some use trails until the short section of real scrambling.

The scrambling was definitely not as hard as advertised. Some sites were saying that it was a Class 4 scramble; that’s a joke. It was straightforward except for one awkward boulder. The exposure is not as bad in my mind as the knife edge on Pfeifferhorn or the east ridge of American Fork Twins.

The summit, on the other hand, is spectacularly exposed on three sides. More on this later.

The clouds meant disappointing views but I was able to see parts of the Wasatch in literally a new light. Also, the lack of sun meant it wasn’t 100 degrees which was a plus.

Back to the exposure issue. At this time I asked my buddy to take a photo of me on a particularly exposed ledge. I casually handed over the camera but you could say that we fumbled the snap. The camera goes tumbling over the edge, bouncing at least two times and shooting out of sight. I was positive that it had fallen down 600 feet to the bottom of the cliff face. Simon pointed out that it was sitting on a ledge about 10 feet below the summit. I climbed down to retrieve it, made an awkward chimney move to get back up, and the screen was dead. But I noticed signs of life – the lens seemed to be focusing and the shutter still made noise. I took a few photos on the way down and it managed to get good exposure and focus! The thing is a tank.

Simon and I had an uneventful trip down, getting back to the car less than 7 hours after leaving. It was a great hike, in a scenic spot, but the difficulty didn’t live up to all the hype in my opinion. I would love to do a winter summit attempt at some point.