Mt. Nebo is the highest point in the Wasatch Mountains and generally marks the southern extent of the range. Located between Payson and Nephi UT, the trailhead for Mt. Nebo’s north ridge is almost 2 hours away from downtown SLC by car. Luckily, the scenic drive around Mt. Nebo is worthy as a destination in itself, so I didn’t mind.

I hit the trail around 8:20 AM and hiked through an open meadow with cattle fence bordering to the left. The flat bench is splendid, with flowers everywhere among the sage and a great view of Mt. Nebo to the northwest.

The vegetation on this trail was unlike most other places in Utah that I’ve hiked. It felt more lush; I’m sure this area must get more snow and rain than most other areas in Utah although it lies on the border of the west desert.

The true summit soon drops out of view but a great vista of the North Peak is visible soon after. The trail then climbs up a grassy gully until reaching the north ridge of Nebo. To the immediate south is North Peak. I took a quick break here to fix my boots and a hummingbird snuck up behind me – the buzz of its wings startled me before I turned around and saw it fly away to some flower. Very cool.

The trail contours around to the East. I chose to hike North Peak since it was only a couple hundred feet of extra gain, but it’s way more efficient to tag it heading south than returning from Nebo.

North Peak, at 11,100′, counts on the Eleveners List for some because it has a prominent gap to the saddle with Nebo, but I count it as a subsidiary of Nebo. It’s not the most exciting peak, but there are good views of Nebo itself so it’s worth the easy trip. I descended down the gentle scree slope back to Wolf Pass to begin the main ascent.

South of the pass, the climber’s trail is obvious as it winds through the vegetation on the hillside. Top-notch wildflowers can be found here along with a million bees. Soon a false summit is reached before beginning the final “knife edge” traverse to the true summit.

Here, the “trail” becomes indistinct. You cannot go wrong by sticking exactly to the top of the ridge.

The scrambling at this point is mostly easy class 2 with an occasional sketchy class 3 step on loose rock. Please be cautious!

After a bit more scrambling I was on top of the highest point in the Wasatch Mountains with amazing views in every direction on this particularly clear day. It only took me 2:20 time including breaks to summit which was a great pace for me.

On the way down I caught sight of some mountain goats! 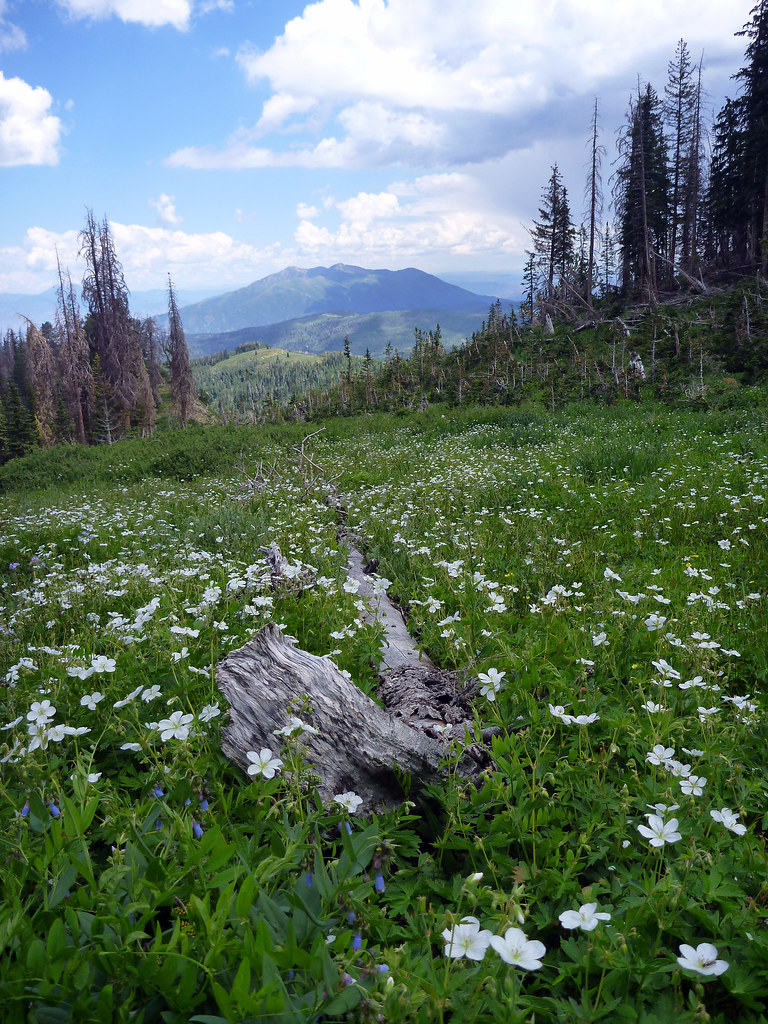 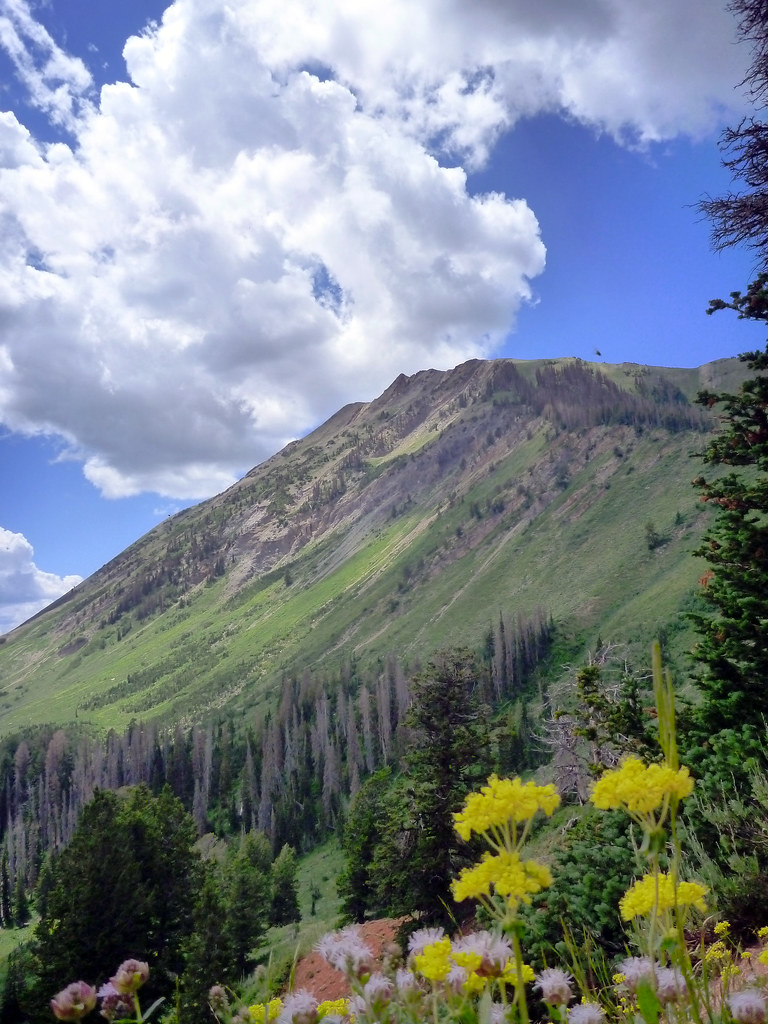 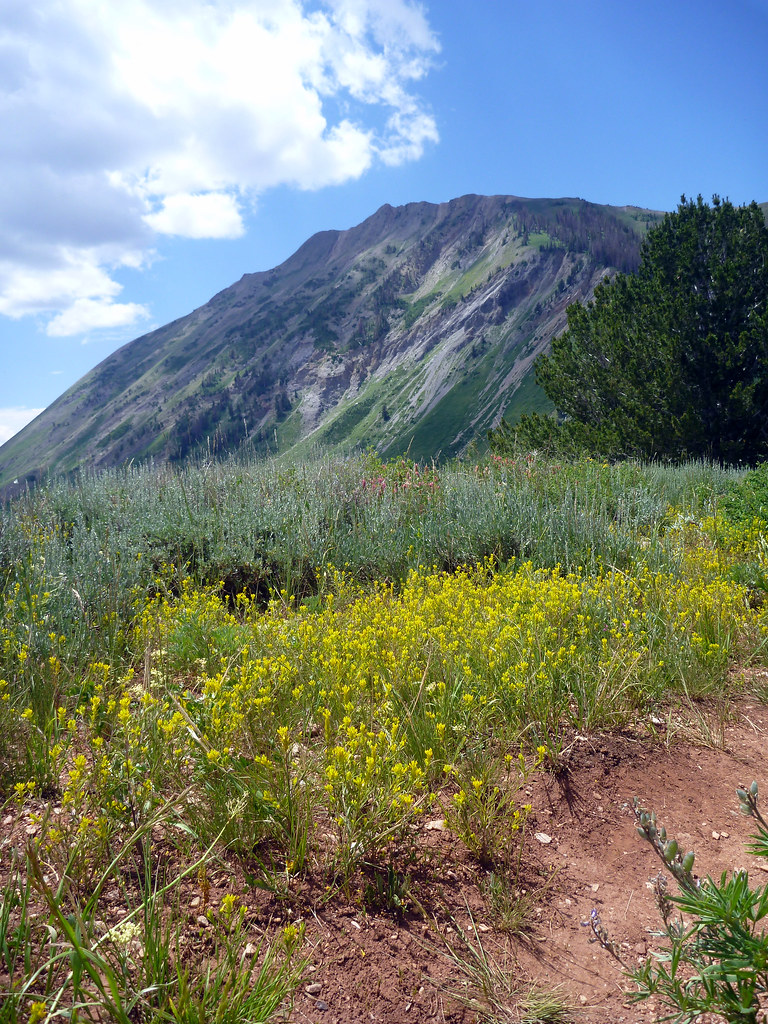 And all too soon I was back at the car. Mt. Nebo brought back great memories of being at Philmont in northern New Mexico – the alpine meadow at the saddle with flowers, sage, and blue skies reminded me of Mt. Baldy. I would be happy to revisit this one in the fall for a different set of colors. 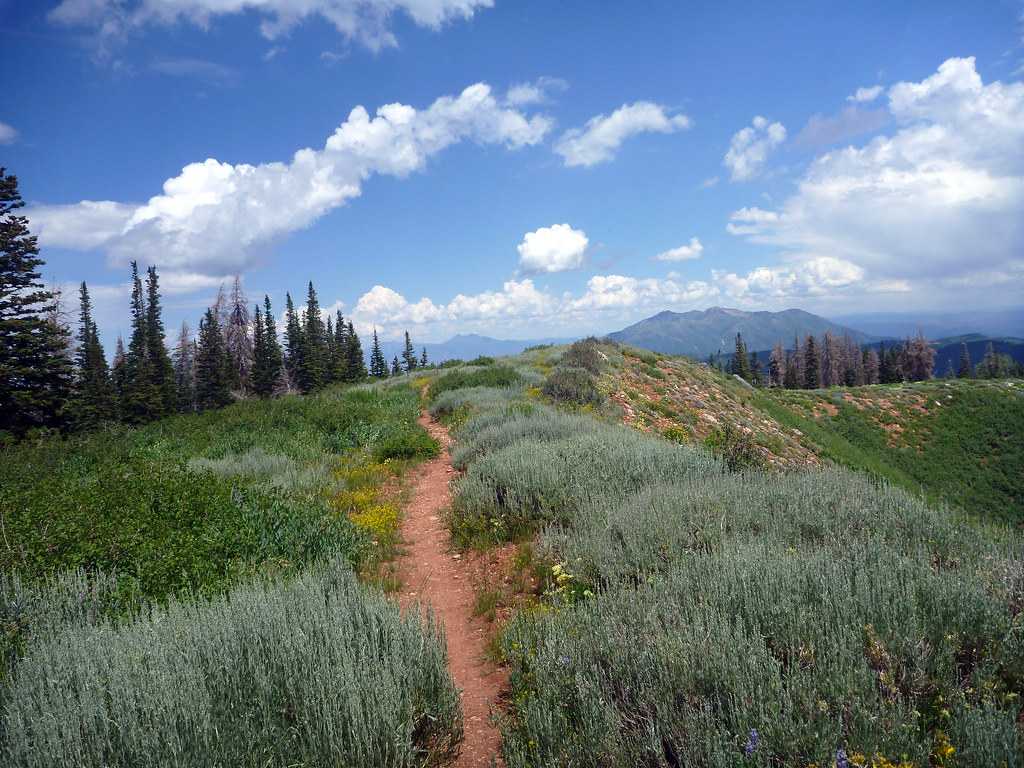